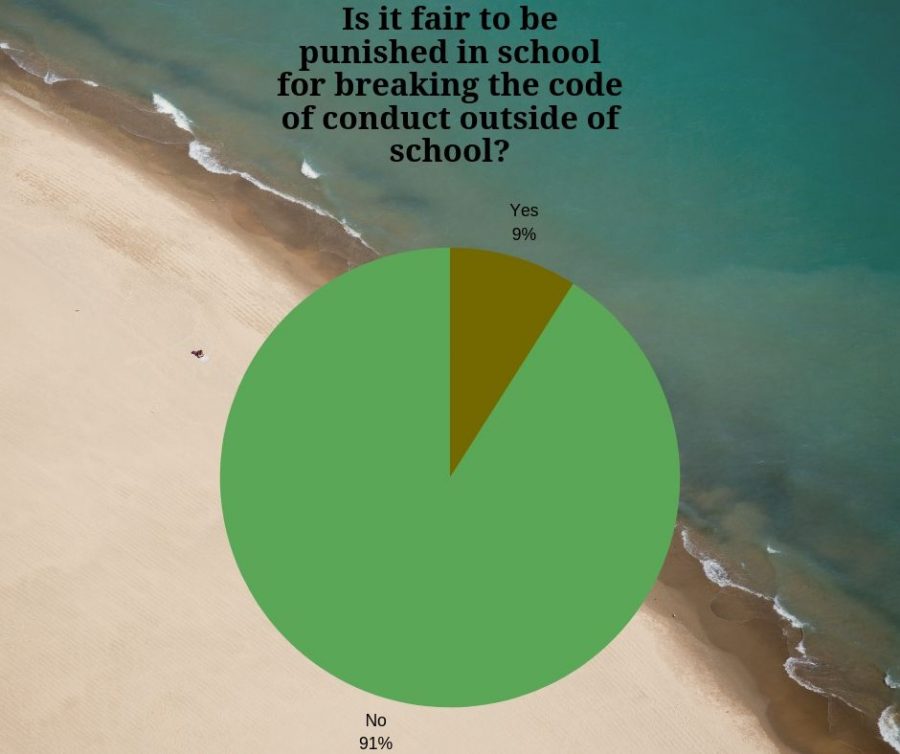 Poll is out of 101 votes on Instagram and 69 votes on Twitter. Information courtesy of The Tower Pulse. Graphic by Henry Ayrault ’19.

One photo was all it took for Maya Ciechanowski ’18, a few of her fellow cheerleaders and a couple of football players at South, to be suspended from various competitions. Because of what happened at a party during the summer, unrelated to school and off school grounds, the extracurricular code of conduct was enforced due to possession of alcohol by a student not associated with South.

In the past two years, there have been occurrences of out of school offenses resulting in a suspension from sports, resignations from captaincy and suspension or removal from clubs. Weekend parties, post-game get-togethers and general high school life outside of school, can all be regulated, according to the student code of conduct.

Ciechanowski said she believed the punishment to be unjust, as neither she nor the other South students were under the influence of an illegal substance. She was suspended for a game.

“Originally, the administration really just got the two guys and (two other girls) in trouble,” Ciechanowiski said. “All that happened was they just had to sit out for a game. Once people realized another girl and I weren’t getting in trouble, people started getting mad.”

Ciechanowski said administration felt pressured to punish her despite not being originally punished. Various people raised questions surrounding her being exempt from punishment.

Westin Bate ’19 said his parents have rules he follows first and foremost, such as curfews and places he can and cannot go, along with general actions that would require punishment. However, Bate said he doesn’t think the school’s administration should be involved outside of school.

“If it were happening in school, then your child is (the school’s) sole responsibility so (administration) can handle it accordingly,” Bate said. “I don’t feel like the school should interfere with stuff parents should deal with based on after-school activities involving the weekends, especially during summer.”

South parent Elizabeth Tengler said while she doesn’t condone underage drinking or drug use, the policy is overstepping the bounds by punishing students for off-campus violations.

“When you’re not even in school, I think that’s up to the parents to come up with a punishment,” parent Elizabeth Tengler said. “It really gets hard when the school is trying to discipline the kids when it’s not even the school year.”

Hayden Barry ’21 said the policy has affected her social life and she is hesitant to go out due to the possibility of being associated with drugs or alcohol. She said a possible change would be not enforcing the policy during the summer or weekends.

“If (students) do something illegal, it is the police’s job to enforce that,” Barry said. “I can see how (administration) can get away with that (during school), but for every day of the year, I just think that’s absurd.”

Athletic Director Chris Booth said students need to understand that the extracurricular code is in effect 24 hours a day, 365 days a year. He said when in a situation involving illegal activities, there could be consequences for students committed to extracurricular programs.

“To me, that’s what I think is the most important thing that comes out of this. Kids aren’t perfect, and adults aren’t perfect,” Booth said. “(However), we want to put our kids in a good position to be successful.”

Principal Moussa Hamka said students involved in extracurricular activities are held to a higher standard than those who do not participate.

Deputy superintendent Dr. Michael Jon Dean said the revisions to the code made by a committee in 2018 were not due to any specific event or occurrence, but they were to adjust a larger inequity in the policy. His role in the process was to bring together a group of stakeholders, coaches, parents, administrators and teachers in order to discuss problems with the policy.

“One of the chief reasons this (revision) came into play was there was a real disconnect between expectations for athletes and expectations for non-athletes, but still kids that do extracurriculars,” Dean said.

Booth said the school is aiming to develop sportsmanship and competition skills. He thinks it is a privilege to play sports at South, so those involved students need to be held to a higher standard.

“Unfortunately, (students) have to understand that there could be consequences because of their commitment to the school and extracurricular programs,” Booth said.

Hamka said it isn’t hard to avoid possible consequences of the code. According to Hamka, when a student is in a situation where they are in the presence of illegal substances, they can leave.

“I don’t think there’s a person who believes underage drinking is appropriate. Students that are 16, 17, 18 years old drinking isn’t something this community stands for,” Hamka said. “So, if you find yourself in that situation, it’s very simple: Leave.”

District attorney, Mark McInerney, said attending school is a fundamental right that cannot be taken away without due process. However, he said extracurricular sports and clubs are not seen in the same light.

“Now, a lot of times parental input is accepted and encouraged, but we can’t ground the kid. We can only take action with respect to that kids for things that are connected to the school,” McInerney said. “we’re always interested in what parents have to say, but we have to make independent decisions.”.

McInerney added the differences between levels of proof for the school to act on an issue versus what the police need to act is vastly less.

“ It’s not like criminal cases, it’s not proof beyond a reasonable doubt. In the school context, for the student code of conduct, administration is permitted a certain amount of discretion,” McInerney said. “Quite often, administration has decided based on two completely different stories about what happened. They have to use their discretion and their experience in dealing with kids.”

Hamka said he doesn’t want this to be something students have in the back of their minds all the time. He hopes it wouldn’t be a worry– as he just wants students to make good decisions.

Ciechanowski said she understood where administration was coming from, as athletes represent the school. She said it is a different situation regarding those participating in athletics, even though she doesn’t support administration’s right to interfere in similar situations to her own.

“I think, and I will always think that what happens outside of school should not follow you to school,” Ciechanowski said. “At the same time, I understand where they’re coming from because we do represent South, and we did represent South.”