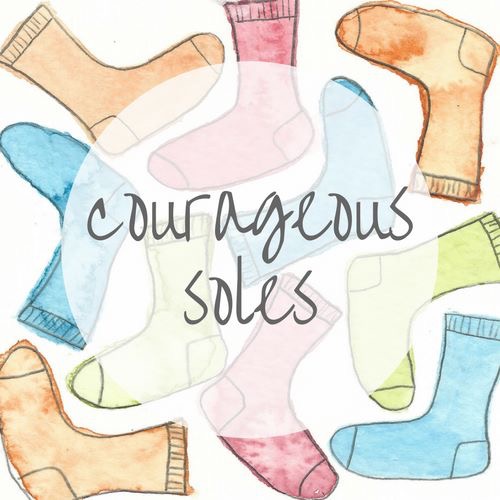 Grosse Pointe South senior Elizabeth Sheeren ’18 and alumni Maggie Wright ’16 began a nonprofit this past October: ‘Courageous Soles,’ which gives socks to children, teens, parents and siblings of patients in the hospital.

With an initial goal of 100 socks and $500 from donations, they’ve exceeded their goals immensely, and not only through items that were contributed.

Throughout Sheeren’s unexpected and lengthy hospital stay, she formed bonds with patients and their families who may be going through tough times.

This past summer, Wright was shadowing in the hospital, and while in surgery, she noticed the surgical socks the patient was wearing and was immediately reminded of the fun socks Elizabeth wears.

Hoping to further ignite her passion in the medical field, Wright was interested in learning more about patients and what they go through, and this sparked the idea of creating a nonprofit.

“I was just thinking that socks are one of the only clothing items you can have on in a hospital and it gives such an individuality to people and I wanted to do something, but I had no clue the logistics of it all,” Wright said.

Since Elizabeth is known for always wearing her funky socks, Wright wanted to include her and start the project together.

“Wacky socks have been something that’s really helped me cope with being in the hospital and going to appointments and infusions, and it’s something fun too because it gives you something to connect with other patients or staff about,” Elizabeth said. “Every time I go to an infusion, everybody is coming in wondering what socks I’m wearing that day.”

Elizabeth and Wright completely underestimated the number of socks that would be donated, they explained.

“Elizabeth and I said, ‘Let’s do something this holiday season just to get it started,’ so we did a wacky sock drive, hoping for maybe 100 pairs,” Wright said.

But Wright said they completely surpassed their goal, now estimating their total to be close to 2,000 pairs of socks.

None of this would’ve been possible without Claire Sheeren ’20, Elizabeth’s younger sister though, both Elizabeth and Wright expressed.

“We would Facetime and she would open up the socks from the Amazon Wishlist I made and put them into bins and write down whether they came with a letter or not, so she was a huge, huge help,” Elizabeth said.

According to Elizabeth, the initial plan was to deliver the socks after the holidays, because even though people donate all year long, there is a post-holiday lull and the donations drop. But when they started receiving more and more socks, some being Christmas-themed, they decided to give some away throughout the holiday season. 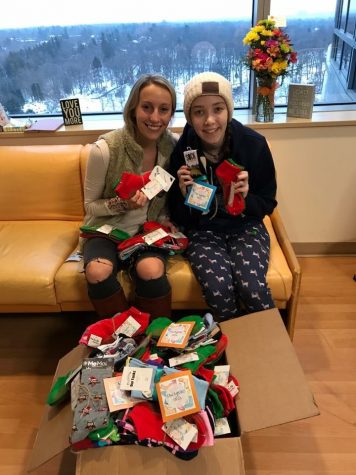 “I love giving back,” Elizabeth said. “I have a huge passion for giving back, and I do a lot of different volunteer work, and then, of course, I absolutely love wacky socks and when (Wright) came to me with this idea I was like, ‘Perfect!’”

And not only are socks an extremely practical item for every person but when you’re admitted to the ER unexpectedly for a long time, you mostly focus on the larger items while packing, forgetting some of the necessities.

“Being a teen in a children’s hospital, there isn’t a lot of support and services because when people donate, they’re thinking of 8-year-olds,” Elizabeth said, “They’re not thinking of the fact that there are 18-year-olds there, but socks, of course, can be used by anyone.”

Right after Thanksgiving, Elizabeth was admitted to the hospital unexpectedly due to her autoimmune diseases, and stayed until New Year’s Eve. During her hospitalization, she got Courageous Soles up and running, doing things such as setting up different pages and contacts and emailing numerous sock companies. According to Sheeren, she took the reins and used Courageous Soles as a project she could exert energy towards while in the hospital.

“The kind of amazing circumstance of the timing of these guys coming up with the concept and establishing the things that need to be established like the Facebook page, the PayPal, the Youcaring and how that just happened to coincide with Elizabeth’s unexpected hospitalization,” Elizabeth’s mom, Julie Sheeren, said.

Although Julie’s involvement didn’t extend farther than carrying boxes and bouncing around ideas with Elizabeth and Wright, she believes what they’re doing together is wonderful, she said.

“That is something that Elizabeth, from the time she first got sick, was always looking to do, to connect with other kids or help other people,” Julie said.

Her favorite story so far from their project, was when she was able to give away a pair of socks to another mother in the hospital, where they felt an emotional connection, she said.

“I thought she was going to cry. She just looked at me and I gave them to her and she looked down, and so, of course, I looked down, and she had bare feet and was like, ‘I have no socks,’” Julie said. “I got to be apart of that, which was really amazing because mom to mom, we had this understanding of what it was like to be in the hospital.”

In that moment, Elizabeth wasn’t feeling well, and she wasn’t up moving around so she wasn’t there to witness the moment, but later she was able to give socks to the young girl, Sammy, too.

And that’s where the project sort of rocketed, they said, when Elizabeth found out Sammy was obsessed with rainbows and unicorns, she knew she needed to give Sammy a pair.

“While she was in this first procedure with the anastesia, my husband drove the socks up. Elizabeth shortly after she had had a spinal tab and a bone marrow biopsy, stuff you are usually not up and around, she was like ‘I have to give Sammy her socks!’,” Julie said.

Because Elizabeth was in the hospital while this was going on, they met a ton of people throughout the process, and realized it wouldn’t only be affecting the kids, there was an impact on parents and grandparents too.

“People were just encouraged because they saw someone overcoming their challenge. Not just overcoming, but thriving. Doing something for others, being focused on others not just on their own pain or difficulty or challenge. I think that that is a huge thing when you think of a college student, a high school student in our culture, it can be just about you guys and I think it’s really encouraging to these families being there at Christmas time, it’s just a big bummer. You see young people that are like let’s have an impact, let’s bless someone, let’s encourage someone,” Julie said.