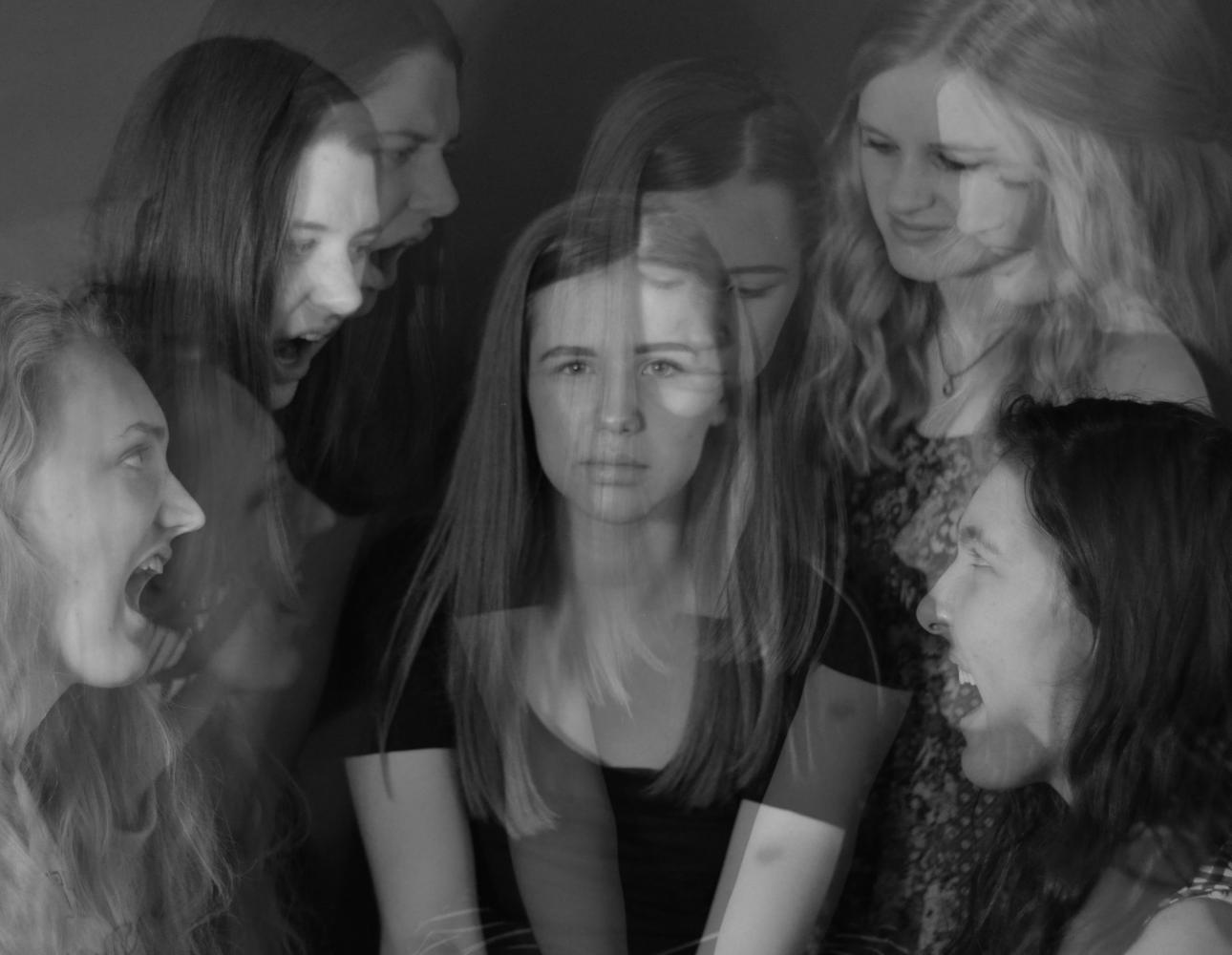 Breaking the barrier behind the stigmas of mental illness

She doesn’t cough every few minutes or have a high temperature. She doesn’t have a stuffy nose and a pile of tissues spilling out of the trash can. However, what she does have is a mental illness, which will affect Carly Orhan ’19 much longer than any common cold would.

Orhan has anxiety. This means she has panic attacks, and is always thinking about how it’s going to affect her on a daily basis.

Lisa Khoury, South’s psychologist, believes some people take physical diseases more seriously than mental ones. This is because there hasn’t been apt medical documentation or research behind mental illnesses.

“The legitimacy of it hasn’t been proven in the public eye,” Khoury said.

According to the National Alliance on Mental Illness (NAMI), one in five adults and one in five teenagers in the U.S have a mental illness.

Dr. Jay Eastman, a certified pediatrician with a practice in Birmingham, said there has always been a stigma surrounding mental health. He thinks a reason for this is because people are reluctant to ask for help with mental problems, and are therefore concerned about being labeled as having a mental illness since they see it as a bad thing.

“It’s a last resort (for these people) to try to ask for mental health kinds of help,” Eastman said.

Eastman said part of the reason people see mental issues as less important than physical ones is because of the bias people have. They don’t view mental illnesses as true illnesses.

“We’re being more and more unpleasantly surprised by the consequences of taking that approach and attitude,” Eastman said.

The Science Behind Some Mental Illnesses

Signs someone may be considering Suicide

Think of how the person may have been before, otherwise known as the baseline. (Be aware that one should take note of these signs if they continue to persist for 2 week or more. Everyone does have bad days or weeks, this does always not mean that it’s a severe case.) Information collected by Sam Cannon from the American Foundation of Suicide Prevention

Counselor Nick Bernbeck said one way of treating a mental illness is through medication.

“Essentially you take medication to make sure your brain is producing the right kinds of chemicals,” Bernbeck said.

Khoury said an example of a mental illness involving chemical changes is anxiety. According to her, anxiety occurs naturally in the human body, and it is a chemical reaction in the brain. Sometimes it can be a healthy thing, like how a little bit of anxiety on a test day can make students more alert.

According to Khoury, people diagnosed with anxiety have uncontrolled levels. Their anxiety can come on unexpectedly at any time because of internal and chemical reasons.

“[Anxiety] affects every part of your body,” Khoury said. ““It’s very real chemical reactions that do interfere with the body’s daily workings.”

According to the National Institute of Mental Health (NIMH), neurotransmitters send chemical signals among neurons in the brain. However, this process has the ability to go awry, which can lead to mental illness.

Khoury said stress or feeling overwhelmed with responsibilities can also contribute to the development of mental illnesses, especially if the brain doesn’t find time to relax.

“There are chemical changes within the body that occur during increased times of stress,” Khoury said via email. “If there are no ‘breaks’ in this chemical increase this can lead to other health issues.”

Bernbeck said there are consequences to leaving any illness untreated. But often, mental issues are less visible, and he believes they go untreated more frequently.

“It really depends on the mental illness for the ramifications of not treating it,” Bernbeck said.

Khoury said leaving a mental illness untreated can have big life impacts in work, relationships, and even the ability to get through the day.

“Sometimes untreated things can get worse because there’s a collateral effect,” Khoury said. “Once you’re having trouble it’s hard to catch back up in your life. Then it’s even harder to fix it later on.”

Eastman said people in younger age groups who are struggling and in trouble can go unrecognized or untreated.

“People are coming to understand that this is not something that happens to somebody else or somebody else’s kid,” Eastman said. “It can happen right in your house.”

Eastman thinks social media can contribute to the development of mental illnesses like depression or anxiety.

“It is so easy on social media to pick on somebody,” Eastman said. “It (cyberbullying) can really ruin somebody’s life…it’s really a phenomenon.”

According to the Association for Psychological Science (APS) mental illnesses have extensive effects on things like employment, education, and physical health. However, not many people receive the help they need. A study done in 2011 found only 59.6 percent of people with mental illnesses said they had gotten treatment.

The APS also stated stereotypes surrounding mental health can lead to self-stigmatizing, causing those with mental illnesses to think negatively toward their disease, and believe they are not worthy of getting help.

How Stress and Pressure Contribute

Eastman does not think “there is any question” about the fact that pressure, especially on high school students, can lead to forms of mental illnesses. He believes it is happening more than it used to be.

“I see an increasing number of kids who come in with one form or another of an anxiety disorder,” Eastman said.

Khoury said lots of pressure can form if it’s left unchecked and students don’t find ways to balance their lives. She thinks pressure for students to do well on important exams such as the ACT or the SAT leave little time left for downtime to relax.

Orhan said her schoolwork adds on to her anxiety. The routine of going to school for a long period of time and then co

ming home to do more work stresses her.

“You come home and you have other stuff you want to do…you have to tell yourself ‘no, you can’t do that’,” Orhan said.” You have to sit down for three extra hours and do homework.”

“The counselors are working really hard to get information to students about how many hours are spent to meet the course requirements,” Khoury said. “So they don’t end up in a spot where they are overwhelmed.”

According to the NIMH, chronic stress can cause many health issues and symptoms, such as headaches, anger, and sleeplessness. If the continual stress on the body gets worse enough, it can then lead into the development of mental health diseases, most likely depression or anxiety.

According to the NAMI, anxiety is the most common mental health disorder in the United States. Although there are many different types of anxiety disorders, one symptom they all have is fear and worry over situations which are not threatening.

Orhan has had anxiety for seven years, ever since her parents got divorced. A symptom of her anxiety is panic attacks, which can be set off from not knowing what to do or having too much to do. Over the years, she has learned what to do in case her anxiety sets her off.

“When you do get set off…you start worrying about how you’re affecting others…you just sort of tumbleweed,” Orhan said.

Orhan says she copes with her disease by planning a lot, but also by remembering she can’t do everything.

“You have to make sure you don’t stretch yourself out too thin,” Orhan said.

Orhan wants people to treat those with anxiety the same as they would treat anyone else, yet remain aware that people who have anxiety are dealing with it all the time.

“Anxiety and disorders are individualized…every person is different,” Orhan said.

Eastman said sometimes people with depression or anxiety, if not evaluated, will tend to “self-treat” their illnesses with the use of substances like alcohol or drugs.

“That kind of trouble is a compounding factor with somebody who is already anxious or depressed.” Eastman said.

Eastman believes people struggling with depression have an easy way to access methods of hurting themselves: the internet.

“It’s one of the unintended consequences of social media and our ability to find information very easily.” Eastman said.

According to NIMH, suicide is the third leading cause of death among adolescents aged 15-19, and over 90 percent of children who died by suicide had a mental health issue.

“You talk therapy, on top of medication, which is really going to help,” he said.

Khoury said if peers see a friend struggling mentally, reaching out and talking will really help them know they are not alone. Sometimes it takes somebody from the outside to give those struggling the support and aid they need.

Misconception: Suicide only caused by a single event

Reality: A number of things that come together at the wrong time and when someone doesn’t have proper coping skills. Information collected by Samantha Cannon from the American Foundation of Suicide

“It’s not a bad thing to recognize that so you can do something about it,” Khoury said. “The bad thing is not doing anything when you’re overloaded.”

Bernbeck said one way to help support students with mental illnesses is for South to be more accepting of all students for their differences. He believes an atmosphere of inclusivity can go a long way.

“If you walk into a place where you feel welcome and understood it can really make your day go better,” Bernbeck said.
Khoury said it’s good to have conversations with with family and friends. Also, the counseling center is always open, along with the school psychologist and social worker, where there is confidentiality.

“There’s solutions,” Khoury said. “You don’t have to suffer in silence.”

According to Eastman, one way of detecting mental illnesses is for psychologists do “a very comprehensive interview with people” and evaluate them for symptoms of a mental health disorder. However, sometimes people don’t get evaluations.

“The tendency of people is to try to help themselves,” Eastman said. “Sometimes the struggling needs more than just a friend’s help, they need a real professional.”

Khoury said education is key to raise more awareness of mental health at South. She believes the more mental health is brought into the open, the less stigmatizing it will be.

“If we keep it in the dark, or away from our everyday conversations, then it’s hidden,” Khoury said. “(We can help) by normalizing it, because so many people are affected.”

Bernbeck believes raising awareness is the best thing to do in order to get rid of the stigma surrounding mental health issues.

“A lot of times when a person hasn’t experienced something firsthand, they don’t understand it,” Bernbeck said. “So a community needs exposure to help break that stigma. Otherwise it’s this thing they hear people talk about that may or may not be real.”

Something Orhan wants people to remember is mental illnesses affect people in different ways, yet it’s important to treat those with mental diseases equally.

“People are coming to understand that this is not something that happens to somebody else or somebody else’s kid. It can happen right in your house.”

Bernbeck thinks the stigma is lessening as more people are becoming aware of mental health issues and their effects.

“I think, as a society, we’ve become more understanding of mental illness,” Bernbeck said. “It was harder in the past because it’s not necessarily a visible, tangible thing. Whereas a physical illness you can see a lot easier.”

Eastman thinks those willing to look at the information regarding mental illnesses can see how mental diseases are prevalent.

“I think we have to understand that it’s something that can happen to anybody,” Eastman said.

According to the National Suicide Prevention Lifeline, their resources provide free, confidential support for those who are in a crisis or distressed. Their number is: 1-800-273-8255.