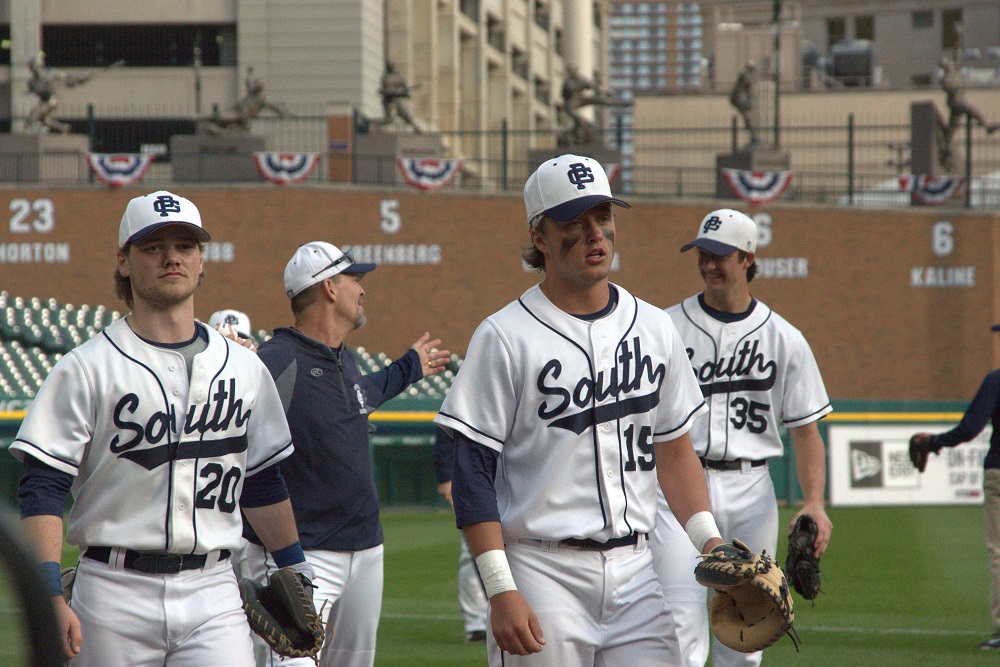 A tradition that is sure to bring in a big crowd no matter what sport is being played.

Now put that setting in the same environment the likes of Miguel Cabrera and Justin Verlander know as common place.

With both teams, South’s Blue Devils and North’s Norsemen, a massive crowd was present to cheer on their respective teams. The Blue Devils were coached by Dan Griesbaum, Matt Reno and John Hackett. Coming into this game, the team felt prepared, but they stressed concerns about their play style over the opposition.

Davis Graham ’18, a member of South’s team, gave his insight on what he was thinking before the game.

“Well, there’s a lot bigger of a crowd than we usually have, which is a good thing, but it makes you a more nervous for the game,” Graham said.

This wasn’t the first time South and North have faced off at Comerica Park. Two years ago, the rivals met and the game brought the second largest crowd for an amatuer game the park has seen.

“I’d say North’s strong suit is definitely their pitching staff, ours is strong as well but I think we have a lot more power in hitting than they do,” Graham said.

The game began in the evening, as the sun set and the cool 45 degree air made slight silhouettes of one’s breath As the mid-April weather held out, patrons saw an offensive display made by both teams. The scoring started early from the Blue Devils, taking two runs in the first. Once that breakout inning was through, South kept up with hits in every inning and put up runs in the third, fifth and finally two more in the seventh, opposing North’s total of four.

Jacob Hinkle ’18 and Logan Mico ’17 had the most hits for South, both having two appearances to first base or more in one instance.

Graham said that although he didn’t perform his best, the team as a whole coerced a strong victory.

Although no home runs were scored, (as expected) excitement was not lacking during the seven innings played. Both teams showed a strong sense of professionalism. From being in the dugout to fielding plays out on the near-perfect grass and gravel, each player became infused with adrenaline under the bright lights at Comerica Park. 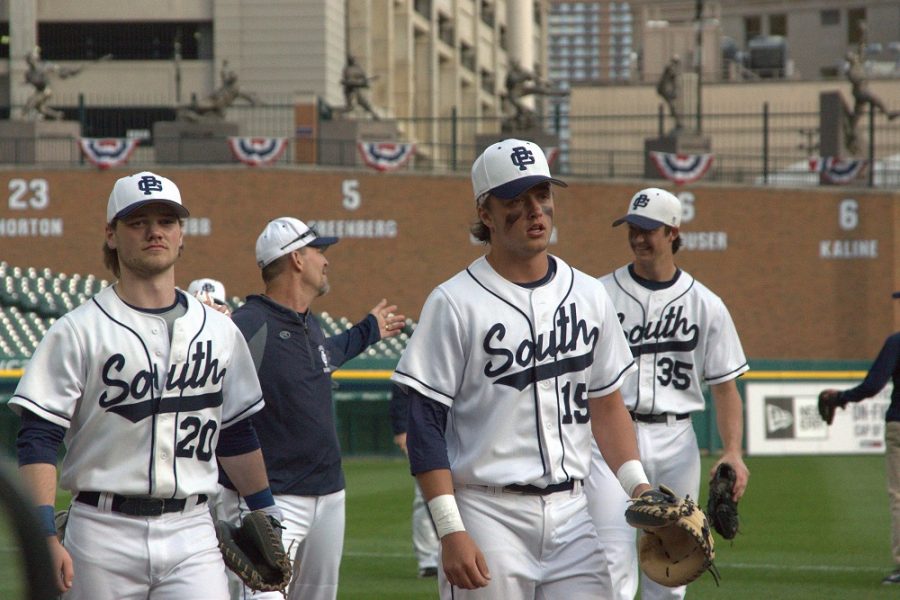 Blue Devils head coach  Dan Griesbaum had comments on the team’s performance, and what a win in a setting like Comerica Park means for the team.

“You can’t help but get a little more fired up in a situation like that, it’s a once-in-a-lifetime opportunity for the most part for a lot of those kids.” Griesbaum said. “They got to do what Miguel Cabrera and all those other Tigers do and set forth on that field and be in the dugout.”

Along with being the coach of South’s baseball team for more than three decades, Griesbaum was also the connection that allowed the teams to play at Comerica, Graham  said.

You can’t help but get a little more fired up in a situation like that, it’s a once-in-a-lifetime opportunity for the most part for a lot of those kids. They got to do what Miguel Cabrera and all those other Tigers do and set forth on that field and be in the dugout.”

One key difference in the Blue Devil playing style when at Comerica: the team pitched a different player each inning to give the most people opportunity to stand where the greatest arms in the MLB have, both Graham and Griesbaum said.

“(In) a normal game we have our starters go as long as they can, basically. Until the fifth, sixth, sometimes seventh inning, as long as they’re throwing well they’ll stay in the game,” Graham said. “We only play there once, (so) we like to give as many people the opportunity to pitch on the mound.”

Leading hitter for the Norsemen was Sam Cross ’17, with three singles.

The two team are set to meet again in mid May. Griesbaum gave his focus points for the team as the rest of the season progresses.

“I think (we need to work on) defense more than anything else, we play in the MAC Red which is an extremely tough division, teams larger than us, sometimes twice as big,” Griesbaum said. “It’s tough competition, and we can’t beat ourselves. That’s the main thing I try to preach to the team is we cannot beat ourselves. If we do that then we will  have the ability to compete in this division. If we don’t then we’ll be in trouble.”