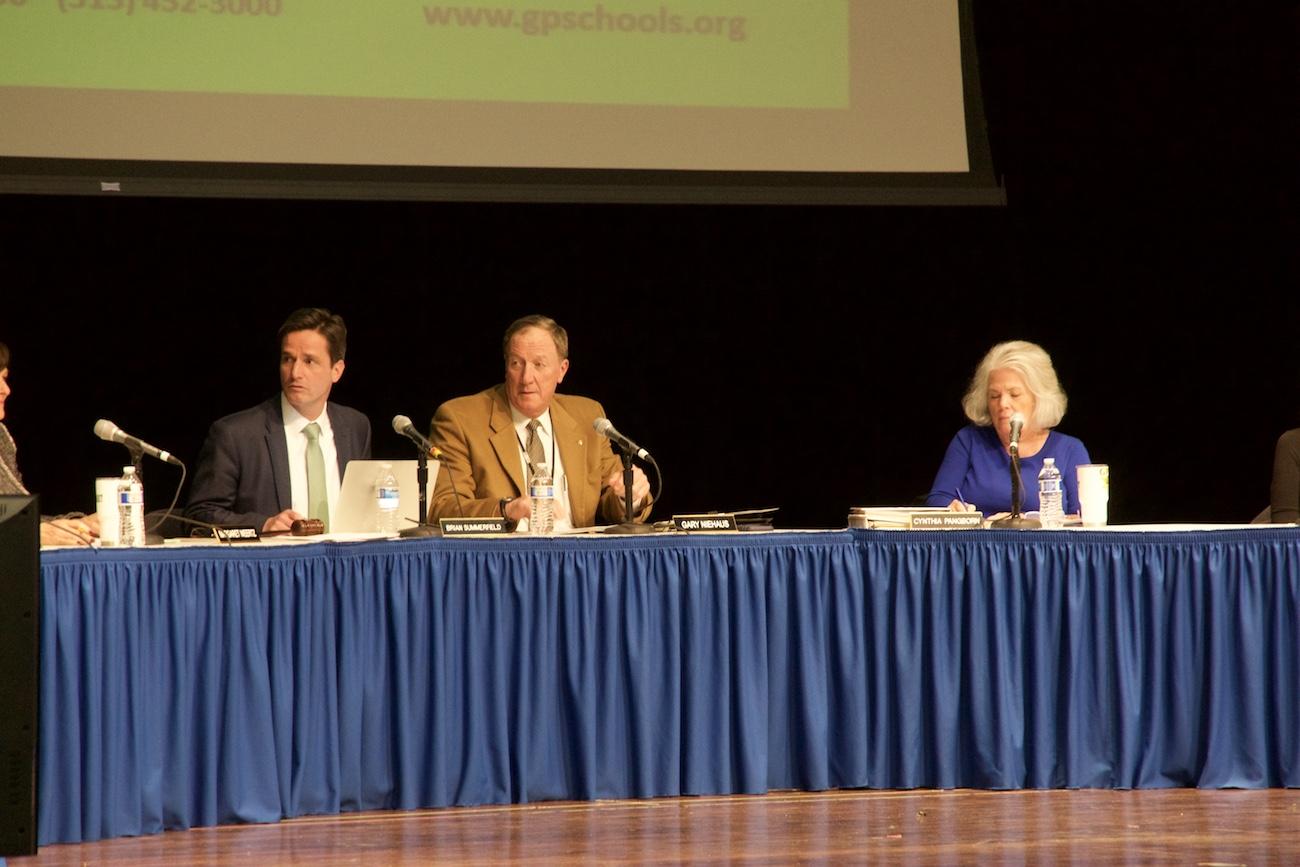 The school board meeting where the district discussed its deficit. (Photo by Jack John Francis '18)

The school board meeting where the district discussed its deficit.

In the past few months, it has come to the attention of the School Board that the GPPSS is currently running under of a deficit of $1.5 million according to Deputy Superintendent, Jon Dean.

According to Dean, the school board first became aware of the problem when they were writing up the budget speculations for this school year.

“So each school year, by law, each school district has to propose a budget that would include their revenues,” Dean said.  “Every year you have this budget and for this school year we sit in, 16-17, we believe we’re going to miss our budget target by approximately $1.5-1.8 million.”

According to Principal Moussa Hamka, inferences on the origin of the deficit seem to be population based.

“What I know is that we’ve had some decrease in enrollment over the last couple of years,” Hamka said.  “When you have a student population that comes under the projected numbers, you will incur a deficit, and you’ll need to make some adjustments.”

The reason why a lack of enrollment incurs a loss to the school system isn’t because of a natural economic reason; in a natural market, such as in a private school for instance, a decrease in students at a certain point leads to more revenue.  But in a public school, grants awarded by the state are directly related to enrollment in that district Hamka said.

“You have, let’s say 100 kids less than you expect,” Hamka said. “Well, each student represents about nine or 10 thousand dollars of state funding. Over the last couple of years, we’ve come in a little under where we’ve projected to be, and enrollment does fluctuate; so whenever enrollment dips, you feel the pain.”

Hamka isn’t the only one who thinks that declining enrollment is the main cause of the deficit.  Dean also believes that the correlation between enrollment and the debt is perhaps valid.

Not only that, but Dean also believes rising costs have played a factor in the district’s debt.

During the Board of Education meeting on Monday, Feb. 27, school board member Lisa Abbey said enrollment in the school district is expected to incur a shortage of about 75 students in the upcoming school year, so it would be inferred that state funding will probably decrease in the next year.

But not all is to blame on the district miscalculating the amount of enrollment decline in the past years.  According to Hamka, another perhaps larger factor is the amount of funding the schools receive from the state in general.

“I think the biggest piece for us to understand is that we have not received the necessary state funding, and increases that we should’ve over the years,” Hamka said.  “The reality right now is that Grosse Pointe Public Schools, and almost every other school district in Michigan, receives less today than they did ten years ago.”

When it comes to scaling back this deficit, the school board hasn’t come to any conclusions about what to do yet, according to Hamka.

“So what the district is looking at is what are our expenditures, what areas or programs do we need to cut back on, I think the school board is working through some of those parameters: class size, programming, staffing levels, and looking for opportunities in the budget to close that deficit gap,” Hamka said.

As for solutions, there are two main ones: to cut costs or to raise revenue.

“We could look to reduce costs as much as we possibly can, most of these things we want to make as far away from the classroom as possible,” Dean said.  “We could also look to gain revenue, by bringing more students into the district, by leasing our facilities and by forming new partnerships.”

Additionally, there should be some respite from the deficit, as a millage has recently passed, according to Dean.

“Now, the good news is is that Wayne County did pass a new form of revenue called the Enhancement Millage, that we actually do receive this year,” Dean said.  “So we should actually make up for that deficit for the school year we sit in, but it won’t solve the long-term problem.”

According to Dean, whether the deficit is being well managed is based on the district’s fund equity, the amount of revenue left over each budget, and when it sinks low enough, there can be consequences.

“Our current fund equity right now is about 7.8 percent, or about 7.8 million dollars,” Dean said.  “If at any point that fund equity drops below 5 percent the state sends in some auditors to try and find out what’s going on, and we have to come up with a formal explanation on why we dropped below 5 percent.  And if we ever drop to 0 percent we’re subject to potentially a state takeover after a certain number of years.”

To cut funding for teachers would be downright ineffectual, according to Head of the Teacher’s Association Michael Rennell, who spoke at the Board of Education meeting on Jan. 9.

“We talked about rising employee costs,” Rennell said at the meeting.  “Our deficit from last year was not employee costs… so to try and dump that on employees, I think is not a fair thing to do.”

According to Rennell at the board meeting, more cuts would be detrimental to both students and teachers alike.

“It’s the people that work here and the kids and the parents and the administration that are all committed to funding a great school district,” Rennell said at the meeting.

The next Board of Education meeting takes place March 14 at Brownell Middle School, where there may be discussion over budget planning.