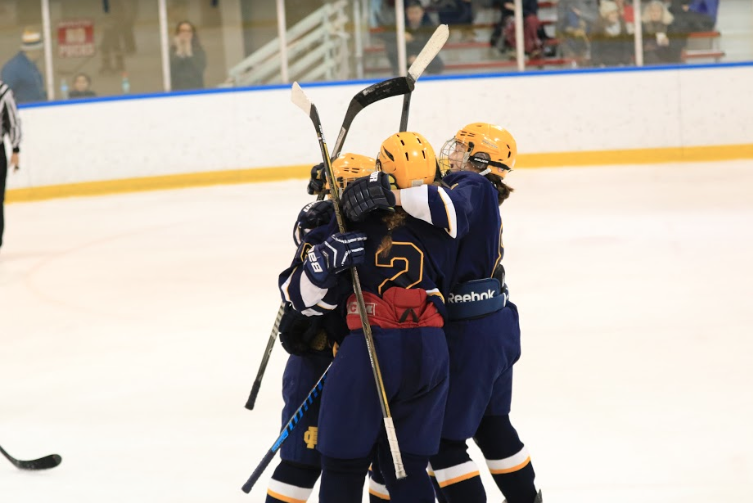 Some of the team celebrates after a good play. Photo by Emma Andreasen ’17

Some of the team celebrates after a good play. Photo by Emma Andreasen ’17

The women’s hockey team played Grosse Pointe North Thursday, mercying them at the beginning of the third period. The final score was 8-0 with a shut out from goalie Bridget Donaldson ‘17.

“We worked very well as a team, and it’s always exciting to beat our rival team.” Donaldson said. The team has a goal to beat North again in the upcoming week.

“Our goal is just to do it all again and keep playing like we did last time,” Donaldson said.

The team’s goals further along in their season is to beat their biggest rivals Mercy and Ladywood, and ultimately win states Donaldson said. With the competition so unmatched from North, the team was able to get more of their line up in.

“New players got to play which was really exciting because we are really focused on the team growing as a whole and working together. It’s the only way to keep our tradition of success going,” Donaldson said.

Overall, the girls were unselfish, they were always looking to make that extra pass, and the defense stayed active, specifically the goalie Coach Chris Booth said.

“Bridget Donaldson is probably our MVP so far this year. She has really brought her game to a whole new level and is playing unbelievably, earning a shutout against North,” Booth said.

For the upcoming North game, the goal will be to get even more new players getting playing time in, as well as keeping the team concentrated on playing a clean game Booth said.

“The focus when playing, I’m sorry to say, inferior competition, is you have to make sure you don’t fall into bad habits, as well as getting a few girls into the lineup who deserve it,” Booth said.

The success of the game stemmed from the aggressive offense and strong defense captain Lauren Kramer ‘18 said.

“Our forwards and defence both played a solid game which helped lead us to win against North,” Kramer said.

The entire team is working hard to play well together and really click as a team, no matter who is on the ice. They are using games against weaker competition to focus on skills that will help them in tougher games, like remaining aggressive in front of the net, Kramer said.

“We kept shooting pucks at the net and got the rebounds. We are working on making sure we are in front of the net to screen the goalie.”