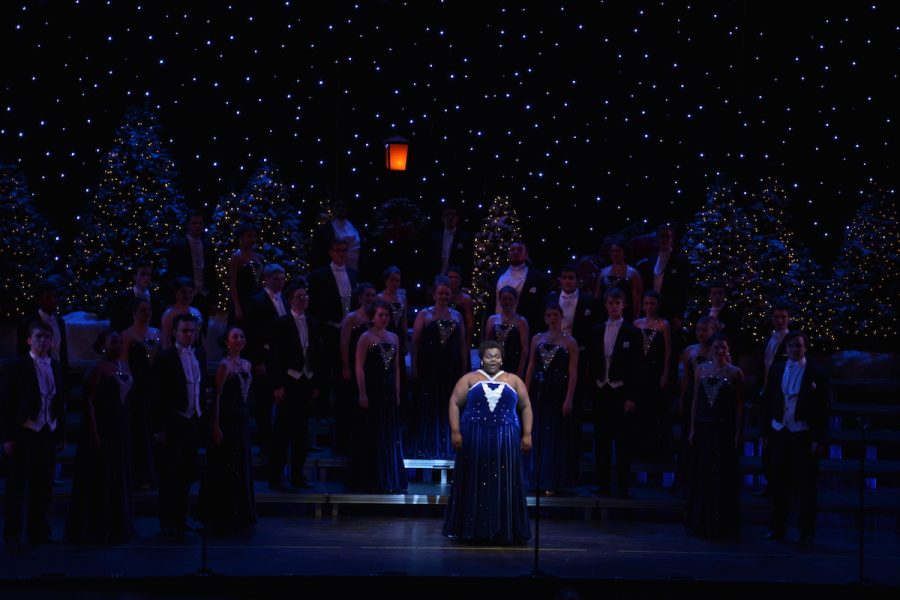 There was a mix of traditional holiday classics, some new Christmas songs, the Halleluiah Chorus and various other holiday based songs. They were performed in a variety of ways: curtain solos and duets, ballads, group and production numbers with multiple-voices. Not only in terms of singing, but also regarding performance and scenery, the concert was excellent. This could be seen by the “enthusiastic”, Poli Dulworth `19 said, and “energetic audience”, director Chris Pratt said.

“Some songs are more spiritual-based and tailored to the religious view of Christmas with lyrics like Jesus Lord at thy birth or Let All with in us praise His Holy Name,” Aikens said. “Songs like Holly Jolly Christmas or Santa Claus is Coming to Town are more for the myth-like aspect of Christmas.”

Even though it may be fun to practice well-known Christmas carols, a lot of work is out in by the choirs to put on a good show.

“We practiced a little more than a month, even if it feels like two years,” Pratt said. The choirs started rehearsing singing and choreography for the Christmas holiday concert in October.

Dulworth said that a  lot of people might have gotten annoyed because they were singing Christmas songs until October.

130 choir singers as well as around 45 other people such as the accompanist, Richard Wolf, choreographers Andy Haines and Annette Layman, staffers, technicians and volunteering parents were all involved in the process.

All had a very intense rehearsal time in the last few weeks. The choir had three four-hour practices the days leading up to the concert. All the work they put into it resulted in the performance.

The intention of the concert was not only about execution and production, but the warmth of the holidays and making people happy, Dulworth said. The concert was to promote the feel and signification of community, confidence and cooperation.

“I love the ability to express my emotion and ideas in a fun and exciting way. To know that you can say whatever you want and show how you feel through another instrument rather than voice when talking is beautiful,” Aikens said. “In choir, you form this special bond with so many people and become like a family. To do what I love with who I love is a fantastic feeling.”

Not only the students enjoy choir a lot, also the director does.  Their enthusiasm is probably a result of the other people’s mood.

“What I like best about being the choir director is challenging the students, make them make improvements and stretch them to reach their full potential,” Pratt said.

His and all the staffer’s and student’s work, energy and time that this project demanded was definitely worth it.

“I am content with our performance. The students did well and the execution and transition of all songs worked well,” Pratt said.

The audience enjoyed the concert a lot as could be seen by the loud enthusiastic applause of the standing people during the concert and at the end.

“The audience was in love. There were happy tears and all smiling faces all night,” Aikens said.

The upcoming concerts of Grosse Pointe South Choirs are the competition sets in January and a Broadway show in May. Don’t miss it if you want to see the choir’s room-filling sound, entertainment, aesthetic, varied stage performance and its professionalism.