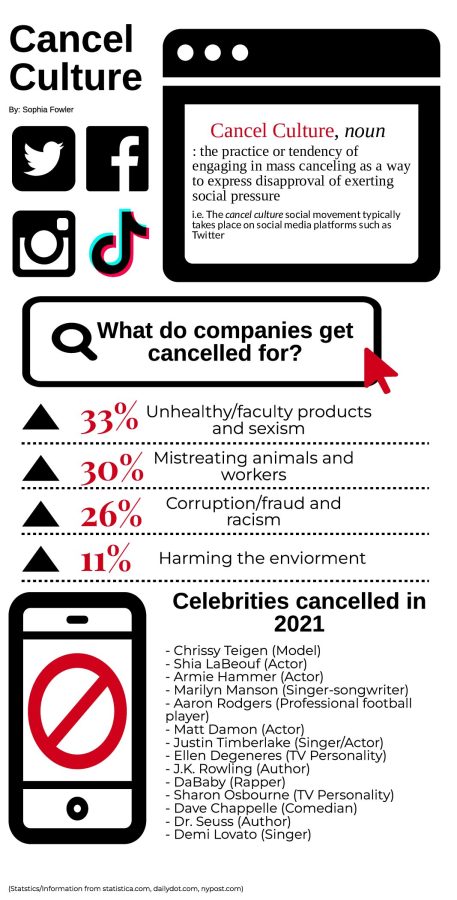 Listen to “The Internet’s Worst Nightmare: Cancel Culture” on Spreaker.</a>

Anyone who goes on Twitter nowadays should be less than shocked to see the “#isoverparty” trending nearly everyday on the platform. Whether it be household-known celebrities or C-List celebrities who belong to a certain fandom which seemingly gets out of control, cancel culture has become a bandwagon of hate across the internet and, in turn, is more counterproductive to actually fighting for change and apology.
The basis of “cancelling” someone makes some sense, but the actual execution of the actions ends up becoming far more destructive to the legitimacy of the actual accusation compared to the individual who’s being put on trial. Sure, lots of people do things that can easily be considered to be “out of taste.” Celebrities are no different, however, because their life is thrown into the spotlight for public opinion. Mistakes become a topic for debate and the ultimate actions of “cancelling”.
Again, the premise surrounding cancelling ends up making some sense. Racist ideas, whether intended or not, harsh words and just blatantly abusive actions against societal norms should be confronted and dealt with. But throwing 140 characters at an individual on the internet is not going to get major executives, managers and publishing companies to hold people accountable. Instead, it weakens the initial argument that a certain celebrity is a problem and creates a circular argument that really gets nowhere in the end.
Cancel culture is used far more to spread more hate than to actually fix the problem. Most of the time, the root of attempting to “cancel” someone is confronting them with a past action that, in a modern sense, ends up being politically incorrect. But by putting a bounty on individual’s heads, instead of trying to actually alleviate the problem by specifically pointing out solutions to the problem, it ends up making those who are “cancelling” them look worse than the individual themselves.
There’s the factor of time that is seemingly misconstrued or just completely ignored by those who participate in cancel culture. Famous singer/songwriter Sia got cancelled in 2021 for having an autistic character in a movie she directed be played by Maddie Ziegler, who does not have any form or degree of autism. Because of this, conversation was brought up about how Ziegler was instructed to act as an autistic person, some people considering it an insulting and politically incorrect move on Sia’s part.
This is a clear example of when cancel culture may make some sense. Someone acting as disabled individuals when they are not is a problem that should be dealt with, and people should be held accountable. But when a situation like this happens, cancel culture ends up becoming a counterforce to the actual push for change.
Cancel culture is treated more as a niche hobby than a push for actual change. While topics being brought up for discussion within culture may hold their value and importance, the way they are presented to the world is anything but professional. There has to be a reason for cancelling someone, and there has to be a reliable platform to do it. But cancel culture has become a poisonous tree of just cancelling people because someone finds them annoying, or because someone famous made minor mistakes decades ago. Accountability is important, and acknowledging poor actions is also important. However, confronting those issues in an immature light by banding together over social media is not the way to ask for social change.

According to Wikipedia, cancel culture or call-out culture is a modern form of ostracism, where someone is thrust out of social or professional circles – whether it be online, on social media, or in person – because of an offensive action. In a perfect world, this concept would make complete sense; people can take responsibility for wrongdoings and work to fix those mistakes. And on a small scale, cancel culture succeeds at this, but the accountability aspect of cancel culture fails when people start to be ostracized for trivial offenses.

Cancel culture has taken a specific hold on social media. With countless people online all creating and sharing content, the internet is the perfect breeding ground for this attitude to grow. On virtual platforms, groups of people with shared interest can all meet online and wield power in a way that fans just can’t replicate in person. Cancel culture’s ability to bring a voice to the voiceless is why it is such a helpful tool in correcting societal wrongs. The biggest example would be the #MeToo movement that brought light to the mistreatment of women by powerful names in Hollywood. Social media and the collective “cancel” mindset against the abusers is what brought many women justice. When dealing with major issues, cancel culture can bring awareness to problems, but that is its biggest fault. After awareness is brought, it is in the hands of the person being canceled to right those wrongs.

I think the word accountability is the perfect word for describing the faults of cancel culture. While it is important to hold influencers and celebrities alike to a certain moral standard, the toxic frenzy of cancel culture often strays from accountability and starts to look a little more like cyber-bullying. Of course people have their political and moral ideals in mind and they want to see that the people they look up to also hold those values. I think it’s reasonable that we want the celebrities we like to be morally aligned with ourselves, so it can be jarring when you find out someone you look up to has done something offensive in the past, and its also reasonable to want them to address the situation and ideally apologize. Again, accountability is the word; for the celebrity to own up to their mistakes and address that they were wrong. But cancel culture has the tendency to spiral out of control.