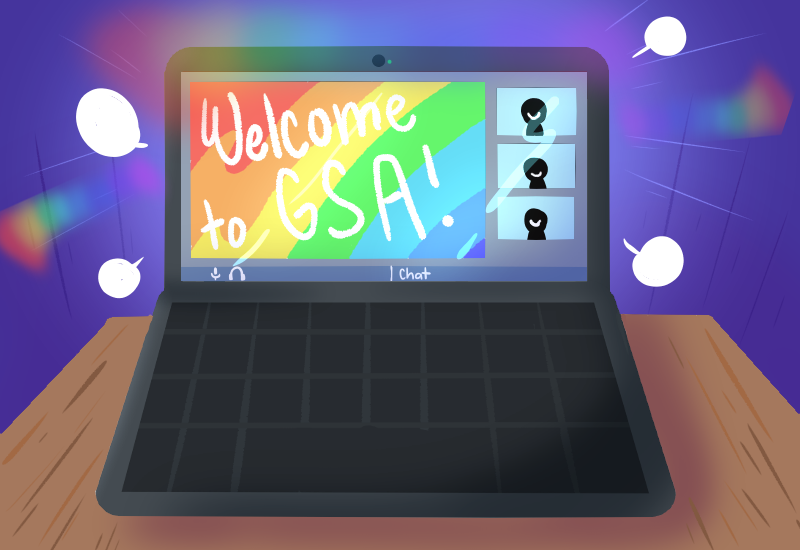 The Gay Straight Allianc (GSA) is creating community and a digital for students for talking about personal struggles and plans for the LGBTQ+ community.

Many clubs and sports have been stifled or even stopped for the year due to COVID-19, according to club president Morgan Bocci ’20. However, GSA has continued their meetings through the platform Discord; Discord is an easy way to connect, as it has options for voice chat, text chat, screen sharing and gaming. This has allowed the club to evolve and grow, while still being there for those who rely on it.

“We meet every Monday, Wednesday and Friday at 3 p.m.; our meetings have lasted mostly between an hour and two,” Bocci said. “One of the benefits of meeting virtually is that we can play a lot more games together. Lately, we’ve been playing Mafia, Skribbl.io and various other online games.”

The club has always been less rigid and more relaxed with no particular topic for each meeting. Members go play games and talk about whatever comes to mind, according to leadership member Joey Beckerman grade ‘22. Lately, the focus has been on having fun and more so on the social aspect of the club.

“We’ve had a lot more interaction, and being online means we can share links, play games and listen to music together,” Beckerman said. “It’s brought us a little closer and removed some of the awkwardness that comes with attending meetings sometimes.”

GSA has opened up the server to other middle and high schools, as well as alumni of South or former students of the Grosse Pointe Public School System. According to Maggie DeReyna ’23, as a member of leadership, she’s observed that most of the people who attended GSA meetings before remote learning are continuing to attend if they can. There’s also a lot of new people attending meetings because they don’t have other clubs that prevent them from meeting face to face weekly.

“I’ve honestly been feeling really lonely with social distancing and whatnot lately, but being able to talk with people that I know face the same struggles and have the same interests and ideas as me is comforting,” Sophie Monarrez ’22 said. “Not only are we together to bring positive change for our community, but we also can just enjoy each other’s company every once in a while.”

According to DeReyna, discussions usually go all over the place. Many times students try to use humor of the situation to ease people’s worries about the situation, but there’s always time for people to talk about their worries pertaining to COVID-19, which people require.

“I’d like to say the members of the GSA servers seem happier now than when we first started meeting this way,” Bocci said. “I also think the more excuses to interact with friends has a positive impact. I can’t speak for everyone, though, (but) I do believe having something to do that involves communication minimizes stress levels, at least a little bit.”

The link for the Discord is in the bio on @gps_gsa on Instagram.