Our View: Valuing your vote and voice 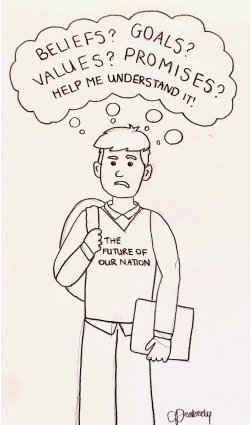 The Tower Editorial Board

The year 2020 does not only bring a new decade and new graduating class, but perhaps most importantly, it brings a presidential election. For most seniors and some juniors, this will be our first time voting, which falls at a crucial time in our country’s history. We’ve already seen the high-stakes played out on television, from fiery Democratic debates to Trump’s campaign suing the New York Times for libel, but we at The Tower believe we must look at the election from the classroom lense just as much as the national one.
Political conversations are unavoidable in schools, whether it be in AP Government or general conversations, nor do we think this is a negative thing. In fact, we believe they are essential in order to educate current and future voters. When we’re learning about politics in our free time, we often fall into a pattern of confirmation bias. We’ve previously discussed the importance of exposure to other ideas in past issues of The Tower; it’s crucial to broaden your thinking to other ideologies and political parties. With that, we now wish to highlight how schools in particular are imperative to this goal and one’s political efficacy.
In classroom discussions, you can’t turn off ideas or unfollow a person you disagree with. You’re forced to defend yourself while facing different opinions. While this reality can be uncomfortable and frustrating at times, we still believe teachers have a responsibility not only to encourage them, but lead them properly. We believe that for the most part, teachers don’t want to give away their political opinions so their teaching stays unbiased. We applaud teachers for letting us think for ourselves, and in this case, playing devil’s advocate to all ideas is the best way they can spur ideas and further discussions.
Another important part of these discussions besides the debate aspect is to review current events. Students are distracted; between difficult classes, homework, sports, clubs and time for family and friends, it’s difficult for us to find time to look at the world beyond our busy schedules. We are not the only ones who are politically ignorant; according to a Forbes study in 2016, only one third of Americans can name the three branches of our federal government.
Each candidate comes with their own roster of main issues and detailed stances. We can memorize their view points and solutions, but how can we vote smartly if we don’t understand what the problems are to begin with? Major talking points such as immigration, health care and the economy are incredibly complex for anyone to understand, and as the youngest voting group, we are even more ignorant considering our lack of experience. According to the United States Census Bureau, while 18 to 29 years old have the lowest voter turnout of any age group, in the 2018 midterm elections this group had the greatest increase in voter turnout from past years. If we wish to continue this pattern in 2020, we need to take greater steps to educate ourselves as students.
While many newspapers endorse a candidate, we instead take this moment to endorse you, the students. Our generation has the power to use our voices by being civically engaged in both local and national elections. Vote for whichever candidate you believe in, and use that vote with an educated voice.