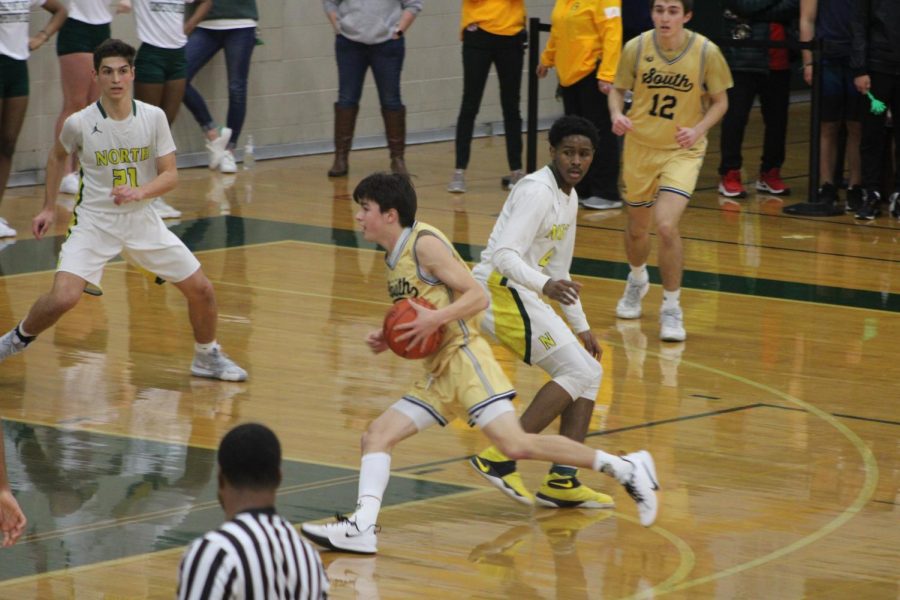 Alex Shaheen drives the the rim for a layup to add to Souths considerable lead over North in the second half.

“We scouted North pretty well, we knew they were running a new system where they sub five players in and five out in order to play all their players, and trying to shoot a lot of three pointers,” Benard said.

According to Benard, after scouting North’s team he devised a tough defensive strategy aimed at matching their intensity on the court.

Benard also said despite him knowing they had the better team, his biggest concern going into the game was the fact it was a rival game on a Friday night with many spectators, putting lots of pressure on the team.

Player Miles Jamieson ‘20 said that they went into the game with lots of confidence knowing they were a better team and were favored in this game.

“I know you are never supposed to go into a game lightly or expect less from your opponent but we knew they were going into this season with not a lot of talent and not a lot of returning players,” Jameison said.

Captain Nick Fannon ‘20 agreed that expectations were high going into the game.

Benard said the team executed the same game plan they had all year, which was to play as a team.

“In this particular game we really upped our defense, picked them up full court and really got into them,” Benard said. “We made nothing easy for them, we wanted them to shoot contested shots and not get easy looks and we definitely did that.”

Jamieson agrees that they played an overall solid game and in particular good defense.

Fannon thought that their offense in particular was on point and agreed that everything was executed well.

“We came out strong and scored eight points in the first 30 seconds,” Fannon ‘20 said. “I think our offense was clean and we were knocking down open shots and creating open shots by being in the correct position.”

As for the rest of the season, one of Benard’s goals for the team is to win the MAC White title and play their best in districts.

Jamieson has different goals for the team and hopes to go undefeated for the rest of the season.

“We have some challenges along the way but I think our team can handle it,” Jamieson said. “One of our goals as a team is to win the league and to go into districts with a lot of confidence.”

Jamieson also said the competition in districts will be some of their most challenging all year.

“There are some good teams in our district who have been playing well such as King and East Detroit,” Jamieson ‘20 said. “I think we have a good shot at competing with those teams and we will see how well we do in the district tournament and go from there.”