Putting the puck to the test: Another victory for the boys varsity hockey team 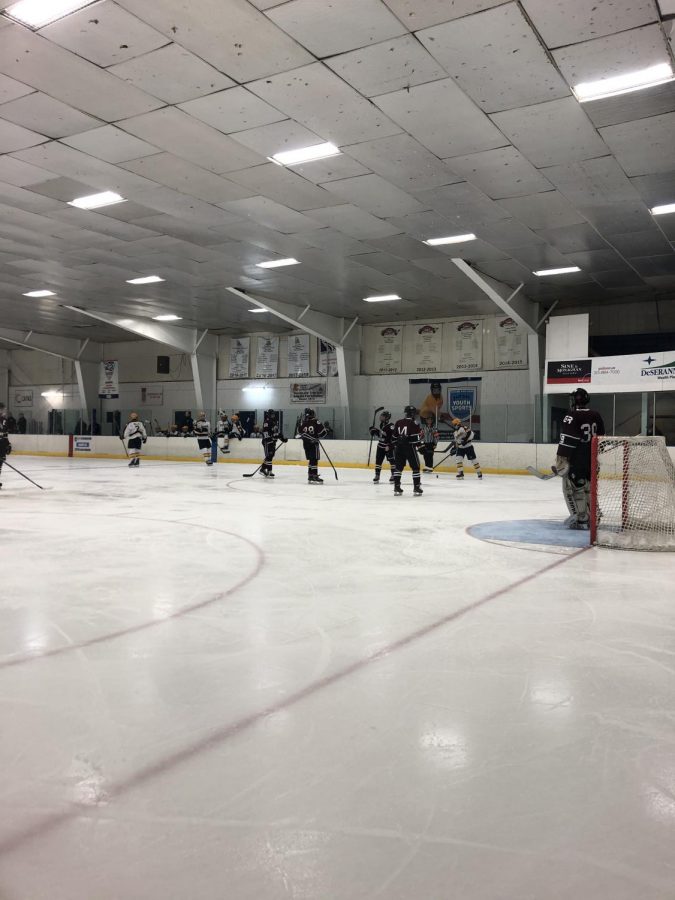 South and Gabriel Richard players fight over the puck during the Blue Devil's 5-1 victory Jan. 4. Photo by Ally Strehlke.

The Blue Devils had a 5-1 victory this past Saturday after a tough loss Friday night.
On Sat. Jan. 4, Blue Devils Boys Varsity Hockey battled Gabriel Richard’s team at the ESH Ice Arena.
The game began with a new addition to the games, which is bringing in two young players from the community to be honorary captains for the team. This game’s captains were brothers Evan and Liam Bernard.
Captain Tommy Daudlin ‘20 says that the honorary captains are a great addition to the games.
“I think it’s really special that we have honorary captains for our home games because it shows support for the community,” Daudlin said. “It helps younger kids get excited about high school hockey.”
Daudlin says that the team was satisfied with the win on Saturday, especially after a tough loss the night before. While everyone played well, one player stuck out to Daudlin.
“The MVP of the game was definitely Adam Strehlke,” Daudlin said. “He had a huge night with four goals and an assist in our 5-1 victory.”
Daudlin also says that the season has been outstanding so far, and that everyone has been playing well.
“We have really come together, but we still have a long road ahead of us,” Daudlin said. “We have to play our best hockey.”