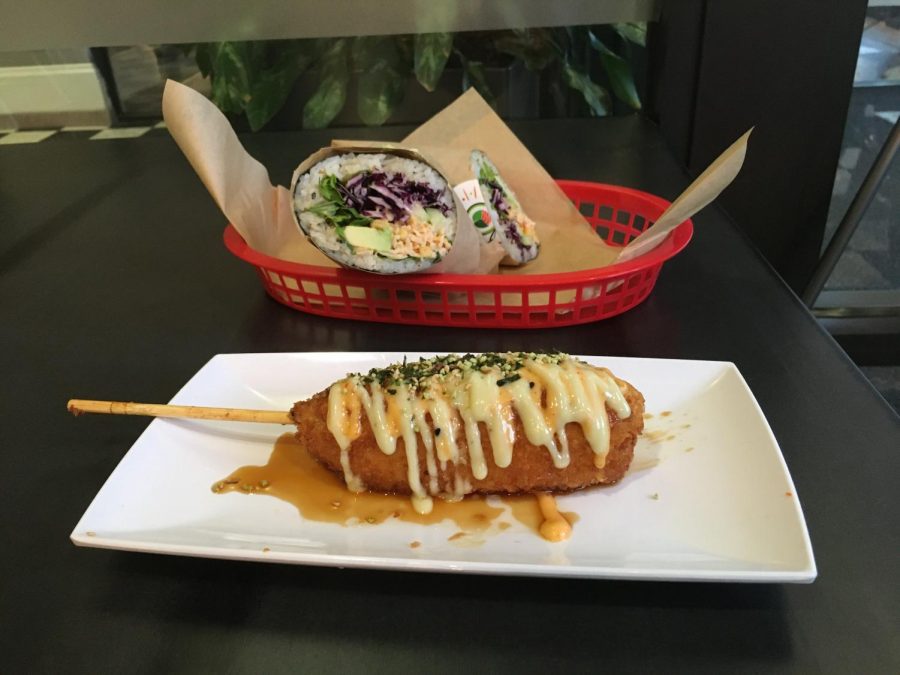 The make-your-own burrito sushi roll, pictured here with vegetables and spicy mayonnaise, can be customized to order. Also pictured here is a sushi corn dog. Photos by Nina Simon '21 and Gaby Dulworth '22.

Atlanta-based chain Poke Burri opened a new restaurant in midtown-Detroit on Dec. 11. Walking into the space, we automatically felt an awkward, seedy vibe. The utensils were plastic, shabbily arranged on a collapsible table. The workers were very nice, but the ordering system was not effective. We were given dry-erase markers and a laminated menu to circle our choices.
The menu was astoundingly limited, with no set options for vegans, vegetarians or people who do not eat fish. We were excited to try the sushi-donuts they are known for, but were saddened when the restaurant did not have them.
We decided to both order appetizers and entrees so that we could get a well-rounded knowledge of their offerings. It is important to note there were only two starters on the menu.
We ordered a make-your-own burrito sushi roll with vegetables and spicy mayonnaise, tuna jalapeño poppers, a sushi corndog and a crab sushi roll. The make your own vegetarian roll was very good, although the vegetables did not seem fresh. The sauce was perfectly spicy, and the seaweed was definitely fresher than most sushi we have had. We were both disappointed that the menu had no other protein than fish to go with the make-your-own burrito.
The food was relatively inexpensive, costing just about $35 for both of our meals combined. They forgot to make one of the items we ordered, so we were given a discounted price on the dinner.
Overall, the food was presented in a very professional and minimal manner, which increased its appeal. Their cuisine, although a bit experimental, seemed to combine flavors and textures well to create something that most wouldn’t think of.
The sushi corndog was nothing short of amazing. It was crispy on the outside, yet the crab was a gooey mixture on the inside, combined with a perfectly suited wasabi and eel sauce. There were a lot of strong flavors presented, yet they all seemed to flow together beautifully.
The Jalepeño Arancini had an interesting taste. They succeeded in presenting the jalepeño without jam-packing it full of spice (although it was not without a kick). However, this appetizer came up short in its flavor profile. According to their menu, it should have included “Japanese spicy seasoning, house-made spicy sauce and wasabi mayo” but none of those were present when tasting.
The sushi rolls, one make-your-own and one from the menu, did not disappoint. Although the vegetables may have been a few days older than we would have liked and may have been excessive, they were still delicious. Both were very filling, and the flavor of the seaweed really came through to bind together all the different ingredients.
So where the food generally thrives, the rest does not. Complete with a welcoming staff and good food, Poke Burri also came with an inefficient ordering system, an odd atmosphere, and a lacking menu.
On the way out, though, we did discover that they deliver food through Doordash. So if you want to get Poke Burri’s appetizing food without the less appealing atmosphere, we would suggest that option. Overall, we rate Poke Burri 7/10.