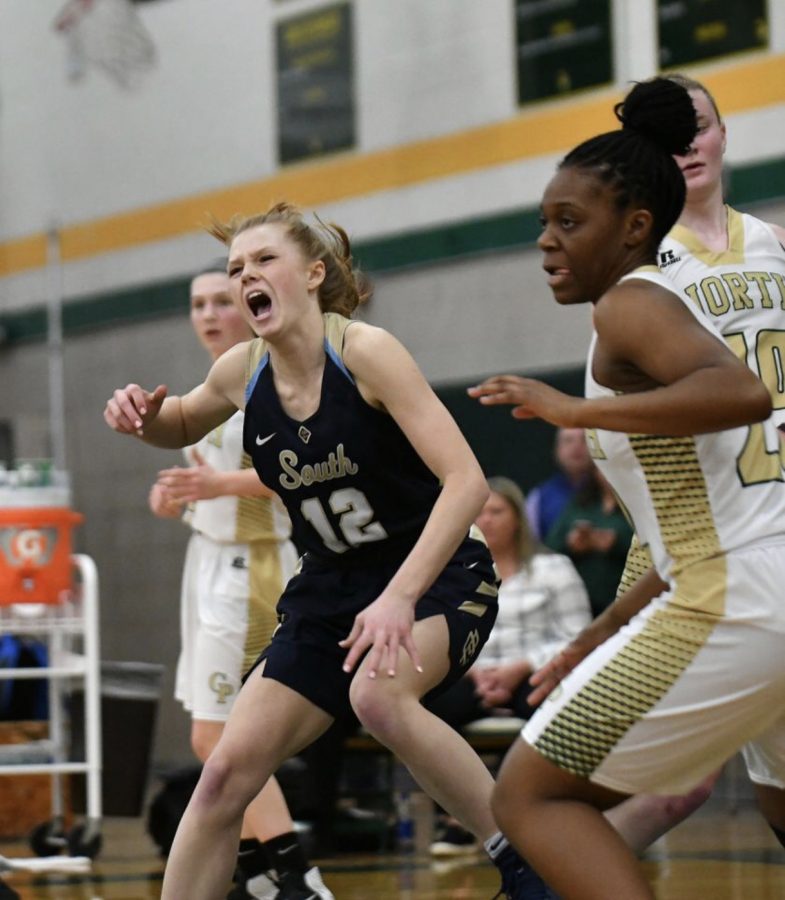 Keely Conlan '21 shouts in pain moments after tearing her ACL. Conlan had to be helped off of the court and would spend the next week in the hospital due to her injury. Photo courtesy of Conlan.

Emma Naporano was running down the basketball court and stopped abruptly, causing her left knee to hyperextend. This extension would ultimately result in surgery, therapy and months with a knee brace– all because of a tear to one ligament.

Orthopedic Doctor Christopher Lee of St. Clair Orthopedics and Sports Medicine said the anterior cruciate ligament (ACL) is a ligament that helps prevent the complete rotation of the knee. A tear to this ligament, Lee said, can heavily impact an athlete’s career.

“We call (ACL tears) indirect trauma; it’s more of an event to a young person,” Lee said. “When you tear your ACL, you can’t really play at a high level anymore. The really sad thing is that (by tearing an ACL), you’ve lost a big part of your life.”

According to Lee, ACL injuries are most common among women athletes, as ACL most commonly tears as a result of sudden stopping during various sports, specifically soccer and basketball.

Emma Naporano ’20 said she tore her ACL while playing basketball in her freshman year.

“I could feel the ACL pop,” Naporano said. “It pretty much just felt like my knee (was) pushed far back out of my socket.”

According to Naporano, it was difficult to accept her injury because basketball played such a large role in her life.

“My first reaction was shock and disbelief, which later became anger,” Naporano said. “I felt that it wasn’t fair that it happened to me and not anyone else.”

Keely Conlan’s ’21 ACL tore after twisting her knee during a basketball game in her sophomore year. According to Conlan, she immediately felt shocked and upset after she twisted her knee.

“I heard (my knee) pop and I was confused, and then I realized what happened,” Conlan said. “I was completely distraught when I tore it because my sister had (torn her ACL), too, and I knew how awful it was.”

The tear can pause an athlete’s career for months due to the long recovery process, according to Lee.

“It usually takes nine months to get over reconstruction; it’s a huge deal,” Lee said. “It takes a long time for the repair to heal up and rehab your knee and get used to running again and bending it.”

For Naparano, recovery after surgery felt lengthy and strenuous; however, she eventually made a full recovery after eleven months of physical therapy.

“The recovery process was painful and exhausting. After surgery, I had to learn how to walk and bend my knee and do other basic functions,” Naporano said. “I was on crutches for two weeks and in a long brace for six weeks after surgery. It took six months to learn to run again.”

Naporano said the mental aspect of recovering was the most challenging factor of healing.

“The hardest part was the emotional pain I suffered through those eleven months of being injured,” Naporano said. “In the beginning, everyone warned me of the physical pain I would go through, but nothing of the mental pain that is a part of a recovery process like that.”

Similar to Naparano, Conlan said she struggled coping with her torn ACL, saying it was tough to go days without moving her leg.

“It was both a mental battle and a physical battle; it was hard just to sit there,” Conlan said. “I missed one week (of school) after I had surgery and I had to wear a brace for a long time. (I) still couldn’t even fully walk on (my leg) for a while.”

According to Lee, some athletes may never return to their sport due to the high probability of re-injuring their ACL.

“It’s not unusual for people who are prone to tearing their ACL to tear one on the other side,” Lee said. “Sooner or later, (you may) tear the other (ACL).”

Due to this high risk, Naporano said she decided to end her basketball career, as she lost the motivation to play a sport after her ACL tear.

“(My) doctors told me there’s a 48% chance of tearing the other ACL once you return to sports, and I couldn’t imagine going through all of that again,” Naporano said. “It was hard watching my friends play sports and do fun, active things that I couldn’t do because I was at extreme risk of reinjury.”

According to Naporano, the effects of the ACL still physically impacts her during day-to-day activities.

“Almost three years later, I still find my knee getting sore and cracking when I work out sometimes,” Naporano said.

Although Conlan returned to sports six months later, she said her injury continues to affect her daily as well.

“(It felt) extremely hard to get back to (sports) and get all my strength back and gain back muscle,” Conlan said. “I still don’t feel fully back.”

Because of her injury, Naparano said she lost her passion for sports.

“After I got cleared sophomore year, I didn’t return to basketball after that, because my ACL injury was always at the back of my mind,” Naporano said. “I used to be really into sports but now I don’t play any anymore. After my ACL tear, I lost the motivation to play a sport.”