Taking it one concert at a time 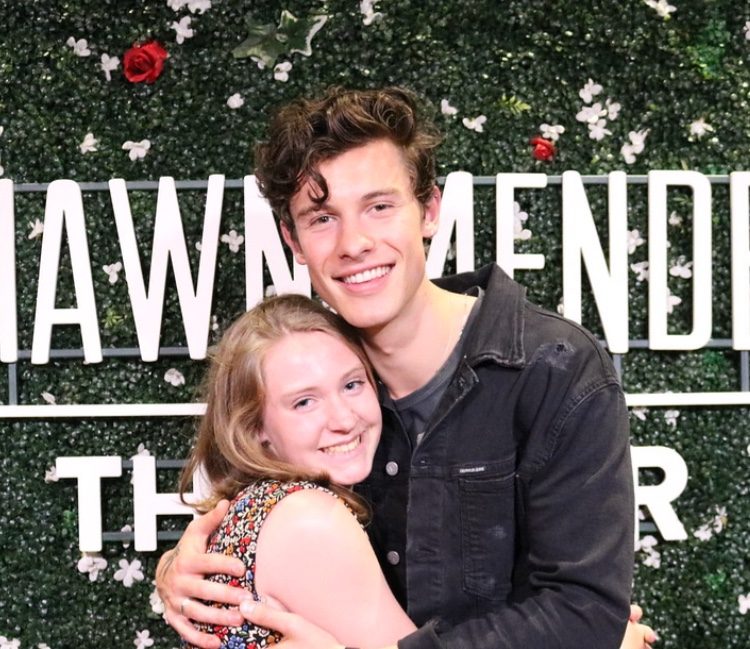 Shawn Mendes and Audrey Smihal '22 take a photo at a meet and greet in Grand Rapids, Micnigan.

Music is a big part of many students lives, and going to concerts is a special opportunity to step away from everyday life and enjoy an unforgettable experience.
Audrey Smihal ’22 has been going to concerts since 2013, her first concert being the Taylor Swift Red Tour. A few years later and she has been to a total of 27 concerts. By her friends, Audrey is known as the ‘crazy concert girl.’
“Concerts are really fun, the environment is super nice, and I just really love it,” Audrey Smihal said. “Concerts mean a lot to me since it’s a really big part of my life.”
Audrey Smihal’s mom, Ann-Marie Smihal, thinks it’s great that her daughter goes to concerts and makes connections with fellow concert goers and gets to leave with amazing memories.
“I love that she goes to concerts because she meets a lot of great people, particularly in line when we’re waiting to go in,” Ann-Marie Smihal said. “I think it’s a really positive environment and safe depending on the artist. I of course make sure she is going to ones that I approve. I think it’s great, it’s fun for her.”
Peter Weglarz ’22 said that concerts haven’t been a big part of his life because he doesn’t believe in idolizing artists and putting up the loads of money to see a performance.
“Cost is an issue because I don’t have a well paying job. I may mow my neighbors lawn on a Wednesday and get 20 dollars, and that’s the money I get,” Weglarz said. “If I’m always going to my parents for money, that’s something that isn’t in me. I like to earn something, and not have to ask my parents.”
Audrey Smihal said that sometimes cost is an issue, but if the artist is important to her, she is willing to spend however much on the ticket.
“Sometimes cost matters unless it’s really important to me,” Audrey Smihal said. “For example, I really love Shawn Mendes and I will spend as much money as I need to see him, but I saw him one night and then the night after my mom and I wanted to see the Jonas Brother. My mom said that if I could find tickets for under 100 dollars then we could go, so it depends.”
Audrey Smihal said that she has also won a few concerts through Twitter and internet contests over the past few years.
“I follow the radio station or the host, and they’ll post about an event,” Audrey Smihal said. “Typically they will say to retweet to win tickets or sign up for this to get entered to win tickets, and occasionally I’ve won them, which is really cool.”
According to Ann-Marie Smihal, the concerts Audrey has won are typically known as ‘switch parties’.
“Audrey won a couple Why Don’t We events, Alex Aiono, and The Vamps,” Ann-Marie Smihal said. “I don’t know if they are doing them that much. They are called switch parties which are smaller groups of people maybe 20 to 30 people and they do three to four songs and have a meet and greet with a question and answer session. It’s really up close and personal which is quite fun. I’ve gone to some of them with her which is awesome.”
27 concerts later and more to come, Audrey Smihal isn’t getting tired of making memories and singing along with her favorite artists.
“Concerts are a place where you can forget everything else and be in that moment for a few hours and I really like that because I don’t have to worry about anything,” Audrey Smihal said. “Especially when everyone is there just for that one person, and you’re all connected, it’s really cool.”