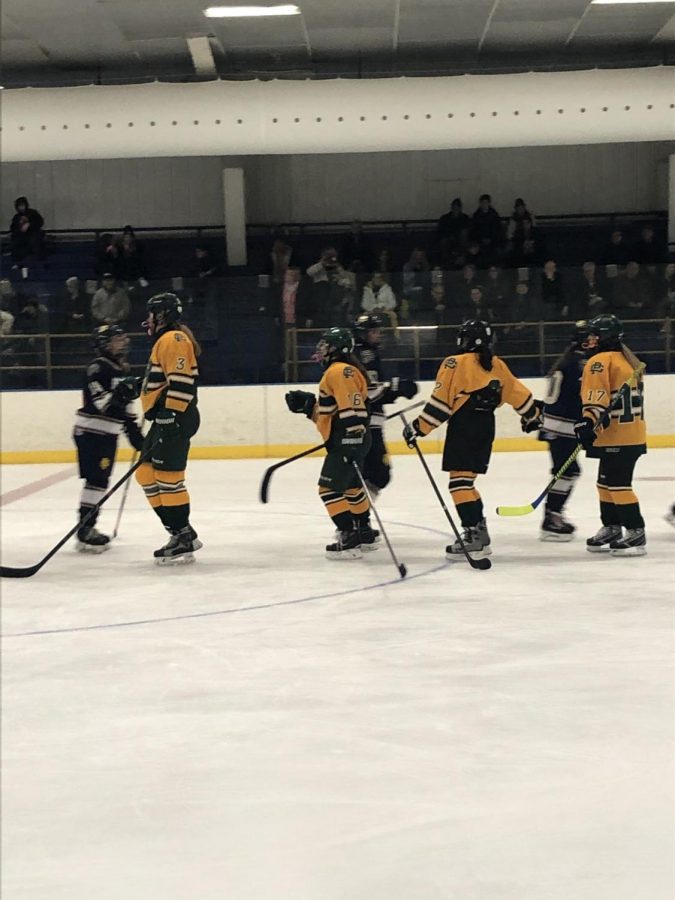 North and Souths girls hockey teams faced off for their first game of the season on Nov. 15. In the end, South won 7-1.

“We had a really good start in the first half, their goal in the second half was a little concerning but we managed to come out on top,” Bridget Backer ’22 said. “North was very aggressive, and it was hard to fight for the puck, but in the end we got it back.”

This goal of beating the cross-town rival was met through hard work in practice, according to Backer.

“We practiced drills that revolved around anything from defending the puck to passing and shooting,” Backer said.

Practice wasn’t the only thing that kept the team on track to their goal though according to team captain Natalie Clexton ’20.

“We did team bonding so we know how to play with each other and communicate on the ice,” Clexton said.

“I think the game was really well-played,” Backer said. “We skated well and got a lot of plays.”

Winning the first game of the season against Souths long-time rival nonetheless, is a great start to the season. The girls hockey team’s next game is Nov. 20.

“It was a great game, even though I fell off the bench,” Grace Lindsay ’23 said. “A low point was when I got knocked over by a girl three times the size as me, but I had a lot of fun with my team.”

Souths girls hockey team’s sportsmanship showed during this game. All their hard work, dedication and the team’s support for one another was immense despite it being their first game of the season, according to Clexton.

“Even though it was anyone’s game, South really pulled through,” Lindsay said. “This was a fantastic start to the season. Hopefully, if we keep working hard, the rest of the season will be like this.”