Red Wings home game results in another loss for Detroit 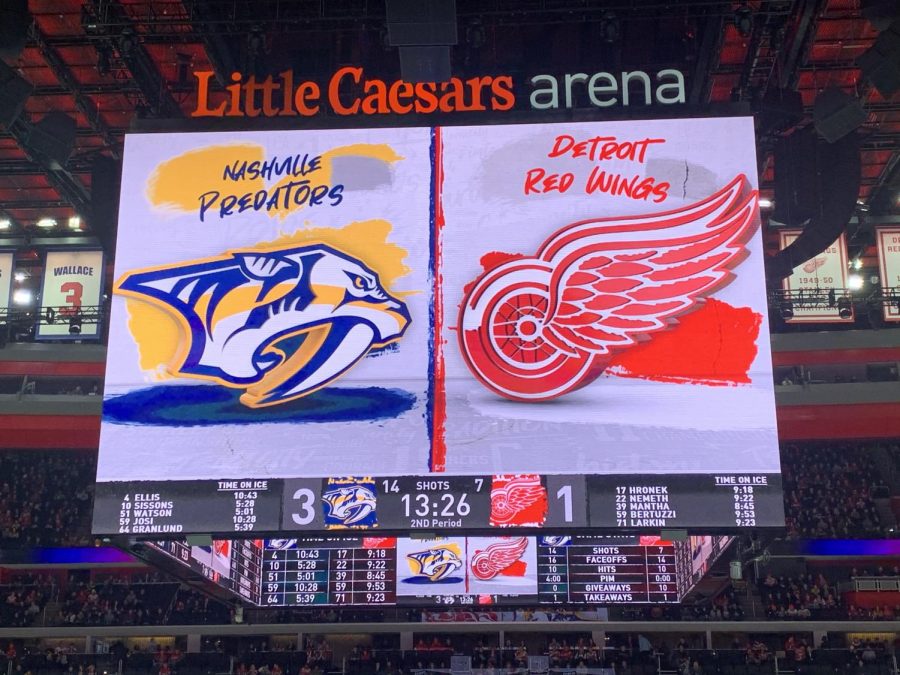 Red Wings take on the Predators in the Little Caesars Arena

The Detroit Red Wings’ hockey season has not been looking good, and their game Monday the 4 against the Nashville Predators was no exception.
Before the game began, the odds were already stacked against the Wings. The Wings have four wins and 10 losses this season, while the Predators have eight wins and only four losses. However, in their first game of the season this year, the Red Wings beat the Predators 5-3. However, the win did not last, ultimately leading to an eight-game losing streak which plagued the Red Wings for weeks. Many Wings fans were bracing for a loss on Monday, November 4. The game was played on home ice of the Detroit Red Wings; Little Caesars Arena. The puck dropped at 7:30 p.m., and the game began.
The first period started positively for the home team when centerman Andreas Athanasiou (72) scored his first goal of the night and his first of the season two minutes and 35 seconds into the first period. The first period ended with the Red Wings surprisingly up 1-0.
As soon as the second period began, Predators centerman Nick Bonino (13) scored two minutes into the second. Three minutes later, Kyle Turris (4) scored a second unassisted goal for the Predators. Things were not looking good for the Red Wings, and yet they got worse. Predators scored yet another goal just a minute later, scored by Colton Sissons (10), and then another minute later another goal for Nashville by Matt Duchene (95). Two minutes before the end of the second period, Duchene scored another goal. The period ended with the Predators up 5-1.
In the second period, the Wings switched out their goalies. Jimmy Howard (35) was not playing a promising game. Jonathan Bernier took his place, which definitely created a positive impact on the Wings game play.
The third period was empty on goals for the first seven minutes, and Red Wings fans were anxiously waiting for Detroit’s turnaround. However, at seven minutes, the Predators scored their sixth and final goal. Filip Forsberg (6), left-wing for the Predators, scored the goal. The game ended with a Nashville win, the final score being 6-1, and the Red Wings adding yet another loss on their already negative record.