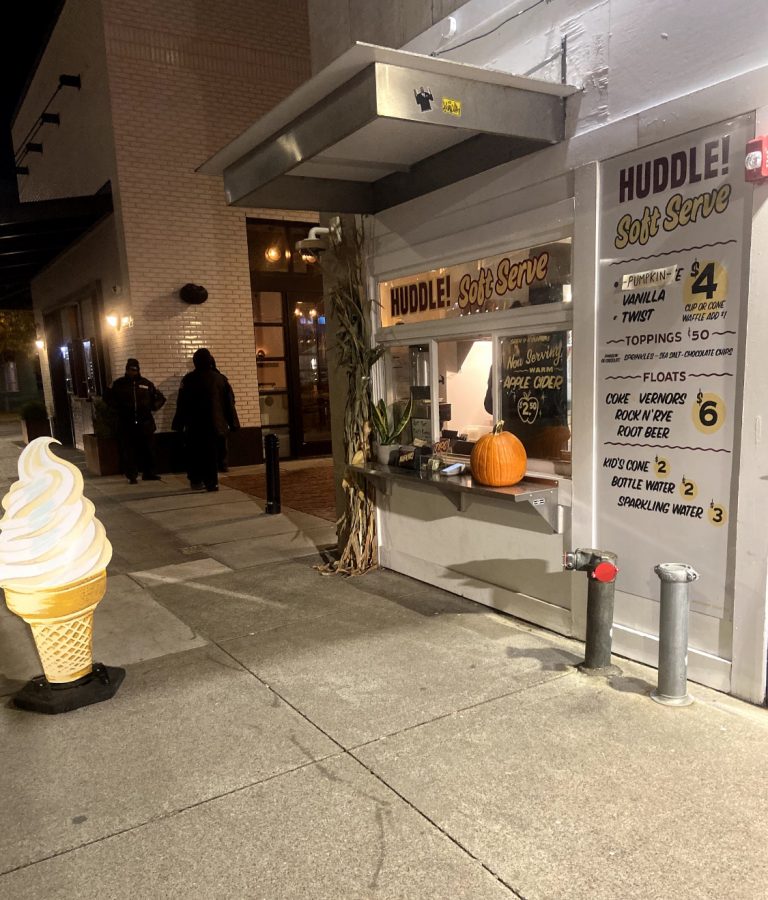 The Huddle is located in downtown Detroit and plans to remain open throughout the winter. Photo by Charlie Matthews '20.

The cold, winter weather is coming in a big force, and what other way to celebrate it than… ice cream?

A new soft serve ice cream stand called Huddle has opened in the heart of Downtown Detroit, and, unlike many other ice cream competitors, the store plans to remain open year-round.

The stand is open 7 days a week and is open for business from 11 am to 11 pm, with Saturday hours going from 11 am to 5 pm the following Sunday. There is no indoor seating at the establishment.

When I saw these hours and months of operation posted on the Internet, I couldn’t believe my eyes. How in the world could an ice cream shop, let alone one with no indoor seating, make money in the sheer months of winter and stay open for twelve hours a day? I had to go find out.

Upon walking up to the stand on a freezing Thursday night in November, I was greeted by a nice little touch; a classic, wooden cutout of a vanilla ice cream cone. I took a breath of relief upon learning that this place was not a hoax and at least EXISTED. However, I was almost certain I would stumble upon a shut window with some sort of “Closed” sign.

Boy was I wrong! Sure enough, there was a worker in there cleaning up around the store. He shockingly didn’t seem super surprised to see a customer; perhaps they have been defying the odds.

The menu presented very basic options. You could order either a cup or cone of vanilla, chocolate, or the limited time pumpkin flavor soft serve. The toppings offered included sprinkles, chocolate chips or sea salt as toppings. You could also order a float with Coke, root beer or Faygo’s Rock and Rye pop. The soft serve ice cream was $4, while the floats were $6. The store also sells cups of warm apple cider for $2.50.

I have eaten chocolate and vanilla flavored ice cream countless times in my 18 years on this Earth, but I can’t safely say I’ve ever eaten pumpkin flavored soft serve. Nonetheless, I ordered a cup of pumpkin soft serve with sprinkles.

I can safely say I wasn’t disappointed; the ice cream was phenomenal. Even in the 30 degree weather, I finished the cup on the walk back to my car several blocks away with no trouble.

As for my take on the actual ice cream, there isn’t a whole lot to comment on. It’s soft serve ice cream, you can’t really mess it up. While some may complain about the simplicity of the menu options, I don’t think having a bunch of flavors is required for a simple ice cream stand like Huddle.

I found the old school styled decor pretty cool. If I hadn’t known any better, I would’ve thought that this place had been open for ages. The menu was hand painted, along with the storefront sign and the wooden ice cream cone cutout. I give the establishment an A+ in the aesthetics category, as I have always felt that new restaurants have been trying too hard to look modern in recent years.

As for the practicality of the store, I first thought that a year-round ice cream shop with no indoor seating couldn’t survive in a city with cold, long winters like Detroit. It may not when it’s all said and done. However, I give props to Huddle for taking a stab at it.

After walking around downtown while I was there, I could feel the energy of the nightlife that could result in potential business for the establishment. I could totally picture hoards of young people having a little too much fun stumbling upon the store fixing for a nice, classic ice cream cone. It’s late night hours on Saturdays should help them get the business they want from those individuals.

All in all, I think that Huddle is a solid addition to the night scene of an ever improving Downtown Detroit. The prices weren’t exactly bargains, but nobody should go downtown looking for bargains anyways. The store shouldn’t have any issue receiving business in the dog days of summer, but I wonder if the young night crowd will be enough to keep the business afloat in the cold winter months.