Opinion: Flags and football: The need to keep political statements out of school settings 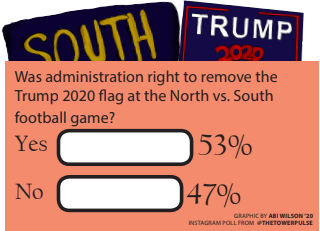 Our democracy is founded on free speech– in and out of the classroom. But the blatant promotion of a political campaign undermines this principle wholly. When a flag bearing the words ‘Trump 2020’ and ‘Keep America Great’ was flown at the North v. South football game on Oct. 18, not only were our school rules broken, but our constitutional principles were disgraced.

I welcome and fully believe in student political participation. Our voices are necessary parts of the political process for the unique perspectives they offer. Personal endorsement of any candidate for office, whether it be school board, congress or our presidency, is a sign of a lively and aware young population that will turn out to vote and participate when it’s most needed.

However, checks on our power exist in certain forums. In a public school district with policies in place eliminating ability to promote a candidate for office, the display and show of a 2020 campaign flag on school property or by a school-sanctioned club at a football game is not allowed. This policy is in place to protect the views and opinions of students falling across the political spectrum.

When a specific candidate is promoted in such a way, it gives the impression that the school and district are endorsing that candidate. Considering our public school status, this is extremely unethical. As a whole, our school cannot and should not promote any political position. The policy protects our school and our student body from assumptions and potential legal issues.

If the flag had bore a message supporting Trump as president without promoting his 2020 campaign, it could’ve flown.

But it is worth considering, outside of the legal ramifications, what effect the display of this particular flag has on the atmosphere of our recreational football games and on our student body. Inside and outside of the oval office, Trump has promoted certain ideals and messages that have, in numerous incidents, incited violence against specific groups.

In an August 2019 article titled ‘No Blame?’, ABC News compiled 36 cases in which someone had invoked Trump as inspiration for their violence, threats or assaults since 2015. It’s also worth noting the potential for many more instances in which an assailant was not prosecuted. As someone belonging to a marginalized group, I understand the fear that some feel when they see a red MAGA hat pass them on the street or a ‘Keep America Great’ banner waving in the air.

Thanks to the conservative culture stoked by Trump that hyperbolizes ‘liberal snowflakes’ and ‘safe spaces’, victim-blaming is very much in-style. Rather than address why someone may feel uncomfortable or frightened, we shame and make fun of them, further embracing and encouraging potentially threatening behaviors.

I ask that my fellow students consider the ramifications of their choices before they make them. I’m not looking to steal your MAGA hat or burn your banner, but I am looking for compassion and an attempt to understand the feelings of those around you who do not believe in the same creed.