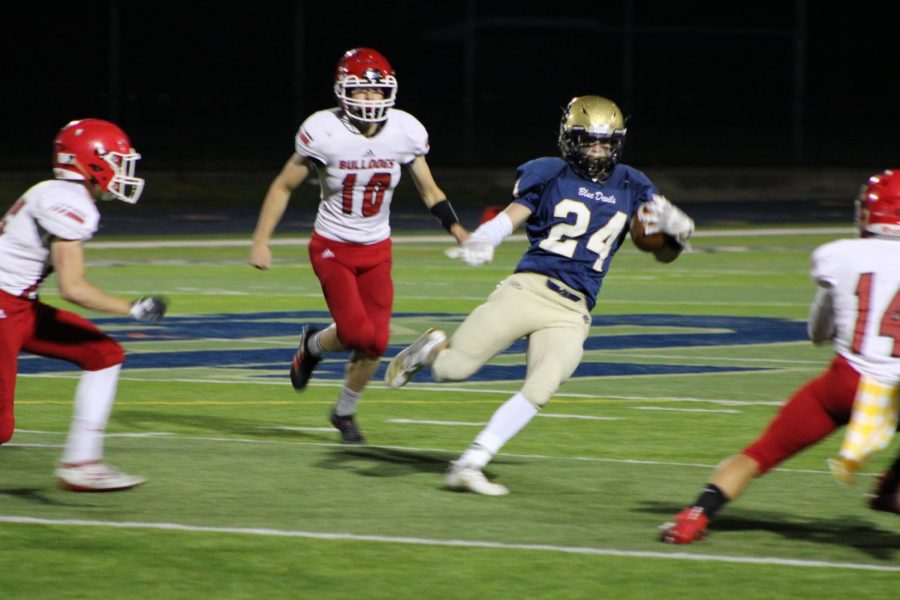 Midway through the third quarter South scores a touchdown to bring the score to 10-7 Blue Devils.

The JV Football squad lost their last game of the season against Romeo High School Thursday Oct. 24, ending with a 7-2 record.

According to Captain Jack Hall ‘22, the JV squad has had a good season despite the setbacks they have been faced with and their dreaded loss against Utica Ford High School.

“We should have won the game we lost against Utica Ford, but we have been really good even without some of the players that got pulled up to varsity,” Hall said. “We have had a really successful season.”

Their loss against Romeo was a matter of the strategy they brought to the game, Hall said.

“Romeo has a really good offensive scheme where they run the ball down our throats, and they have bigger, faster and stronger players than we have,” Hall said.

Overall, Hall was most pleased with the teams consistent defensive strategy, and offensive line performance throughout the season.

“Offensively, we are really diverse between running the ball and throwing the ball with basically equal yards in rushing and passing the ball,” Hall said. “Defensively, our linebacker core holds us in and keeps us in games and are overall dominant.”