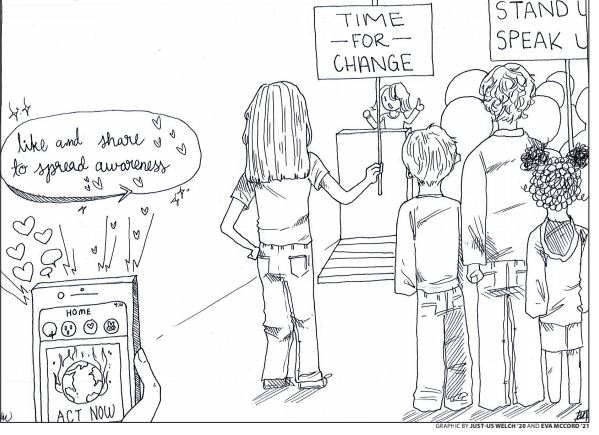 Youth activism is typically framed by media outlets as outbursts from passionate, angsty kids, somewhat naive in nature and brushed off as a cry for attention. Teenagers enter into high school and early adulthood with a critical eye of the world, a view of its needs and pain and a sense of hope concerning its promises and possibilities.

Some may view youth-led activism as an innocent shove at authority, but at The Tower, we believe there is something more to these displays of First Amendment rights.

Urgency. Frustration. Energy.  These three words encapsulate the protests, rallies, walk-outs and marches that young people are conducting and frequently attending– in fact, one in 10 students say they will participate in a protest between high school and college, according to Inside Higher Ed, a college-focused media company.

In the beginning, young people fought with stones, arrows and fists.  Today, it doesn’t have to be a major event to draw people’s attention to an issue– research, a debate in English or volunteering for a day are all simple ways to get involved in a cause.  We at the Tower believe it is commendable to start early– if you’re motivated to support a cause, support it.

Now more than ever, youth are turning to social media to argue their opinions.  While these platforms promote a low-cost, low-risk and noncommittal environment, they are a start. That comes with one caveat: sometimes, posts are viewed as boosting attention to one’s ego rather than attention to a cause. Activism is not about the individual, and it shouldn’t be treated as such.

Examples of student-led activism are seen throughout the world at this very moment. Right now, 16-year-old climate activists Xiuhtezcatl Roske-Martinez and Greta Thunberg are making headlines– Martinez with three federal lawsuits and three TED talks behind him and Thunberg with a nomination for the Nobel Peace Prize.  They are two of many youth fighting for justice and righteousness in the world.

Yet student activism is not a new phenomenon. In the United States, the peak of student protests can be traced to the 1960s and 1970s, years in which the country was fighting a war in Vietnam and go the civil rights movement, arguably one of the most significant and impactful movements in modern history.   Like the protests throughout the decades, today’s students are advocating for their lives.

We at The Tower believe maturity in activism is key. We’re not right on every issue. Defending a cause is important, but we all make mistakes and grow in our opinions and points of view as we get older.

Hot-topic issues don’t necessarily have one answer, and it is important to recognize that views deserve validation but are subject to change.

While some may view teenagers as too immature to hold opinions, we at the Tower believe young people are the true eyewitnesses to the issues impacting our world.

Student activism can bring about justifiable and positive changes in education, rights and justice for all regardless of one’s background, identity, or situation.. This is the very foundation of ‘the land of the free and the home of the brave.’

Americans’ unique ability to speak out and protest is what so many others from foreign lands come here for and what we as citizens continue to uphold as our birthright– ‘liberty and justice for all.’ This is our doctrine, our philosophy, and a distinctively American reason for existence.

Our voices matter, even in high school. We are the next generation of leaders, and we must step up and take on our responsibilities wisely. We are all born with the potential to fight, and if there’s a cause you want to stand up for, pinpoint it, educate yourself, establish a goal and start moving.

At South, we are privileged to have many resources and opportunities to voice our opinions and engage in activism, so why not take advantage of them?  Doing so opens our community to a larger world, which only helps our students and culture here at school.