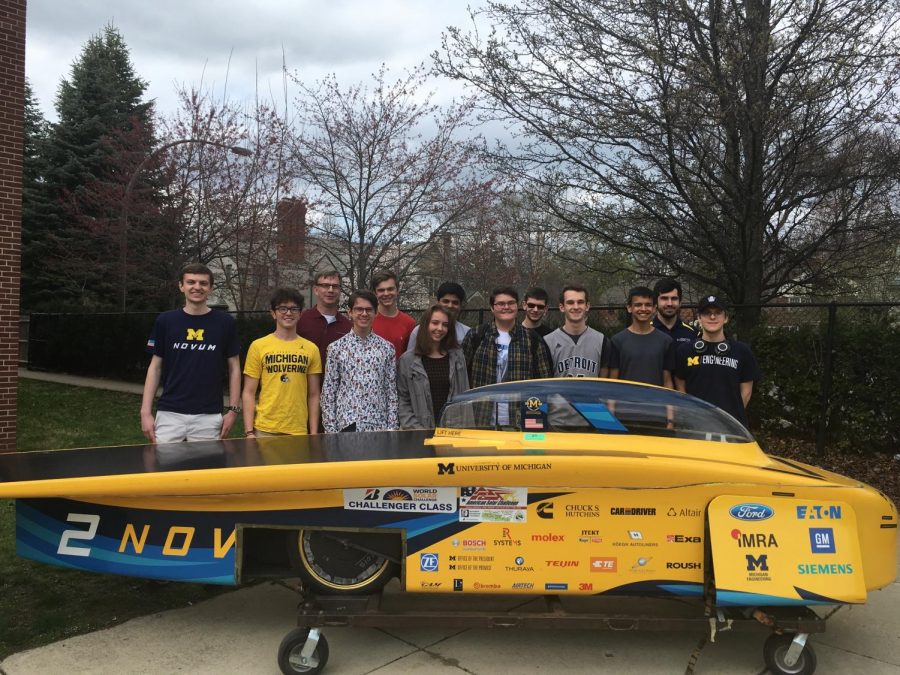 The team, whose ultimate goal is to build a car using only solar power, stands with the University of Michigan’s solar car last year. The team has raised $30,000, $5,000 more than their initial goal. Photos courtesy of Alex Bower ’20.

From electrical engineering to design, the Solar Car team must possess a wide range of skills to prepare for the Solar Car Challenge at Texas Motor Speedway in July.

The ultimate goal for the team is to build as effective of a car as possible using only solar power, according to adviser James Adams. But, the process of building a solar car can be a daunting task.

“I think it’s really intimidating to get started,” Alex Bower ’20 said. “But what I found is that there are so many good resources, whether it be online or actual people in the community that are willing to help you.”

As reported by Bower, the intensive process began with fundraising. With the help of the Mother’s Club, Grosse Pointe Foundation, Rotary Club and Red Crown, the Solar Car team raised $30,000, $5,000 over their initial goal.

“Once we were financially stable, it was all about figuring out exactly what we were going to do,” Bower said. “Since none of us really had any engineering experience prior, there were a lot of hours spent watching YouTube videos, reading books and trying to communicate with people who are experts in the field.”

Now that the fundamental aspects are out of the way, Adams said the fun part can begin. However, in order to have a successful season, team members must be invested in the program.

“You’re not going to know how to do lots of things.” Adams said. “That’s part of the whole idea. You come in, and you learn how to do things. But if you’re not really willing to put in the time and perseverance, then you’re not a very good member of the team.”

According to Lizzie High ’20, Solar Car is different than other clubs because it’s so student-driven.

“What I like about Solar Car is that it’s really something that we do from scratch,” High said. “It’s different from robotics, because there’s no recipe, there’s no starter kit. We have full control in that we really have to design from the business end, from the engineering end, from the mechanics end. It’s really, really cool.”

Students on Solar Car get the opportunity to construct their vehicle from the ground up, High said. But in order to have the full experience, they need to be able to work in a team.

“The team really just needs to be excited to work together,” High said. “If people aren’t really excited to work on the car, then they’re not going to want to take the time to solve all of the problems, and to learn everything about building a car.”