A slushie for the season 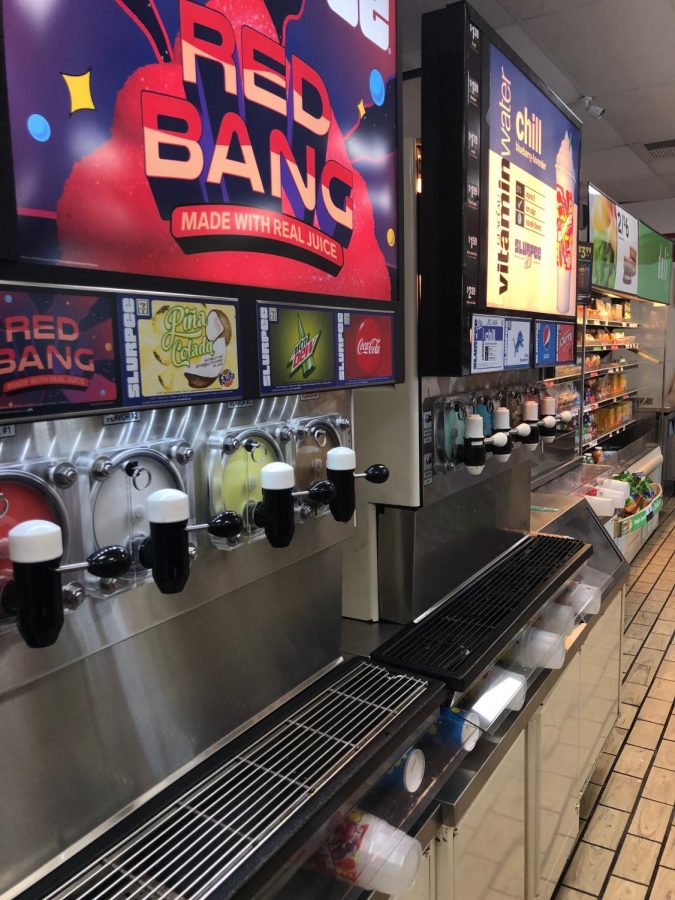 Sleven slushie machine, with a variety of flavors waiting for students to enjoy.

Grosse Pointe is home to multiple slushie hotspots students can visit at their leisure. In doing so, a “slushie culture” has formed. From winter to summer, students purchase slushies at gas stations and convenience stores such as BP and Jerry’s.

Driving down to the local gas station to get a slushie may not appear significant, but according to Caroline Kubek ’20, these designated drives have, unknowingly, created culture that is a fun activity to do with your friends in Grosse Pointe.

“With Grosse Pointe being such a small town, the only fun thing to do is to drive around and get slurpees,” Kubek said.

According to Kubek, everyone is very welcoming in their stores. To be able to hangout with friends, whether in the Village or at lunch, the slushees are refreshing and and make long school days or summer days better.

“Every weekend, it’s a very typical thing for me and my friends to just drive around,” Kubek said. “We will listen to music while sipping on our (slushies) from either Jerry’s party store, BP gas station or 7-Eleven.”

Texting a friend and asking to grab a slushie and go for a drive has become a common thing amongst a large majority of high school students, Kubek said. The students find it enjoyable, Kubek said, and the businesses around GP love it.

According to BP gas station cashier Chris Swartz, when kids continually come in and out of their store, it’s great for business– it’s a daily occurrence as well.

“They’re here all the time,” Swartz said. “(Students will come) after school, in a blizzard or on summer break on a ninety degree day.”

Ethan Rothenbuhler ’19 said he and his friends prefer 7-Eleven because of the scenic route they take on their drive there. The experience is also enjoyable, Rothenbuhler said, thanks to the cashiers.

“7-eleven is fun because you get to go down Lakeshore, see the water, and then you get there and it’s very chill,” Rothenbuhler said. “The he cashiers like us, so sometimes, we can get free refills. The slushies are just great.”

These slushie stops have also turned into somewhat of a hangout. When kids go in to the shops they stay for a while and enjoy themselves Swartz said.

“It’s great because not only do (students) come in and get slushies, but they hangout here and chat, too,” Swartz said. “So that way, (BP turns into) a nice, cool place,”

Not only do the kids relax inside the shops they also meet up with friends and enjoy themselves outside Rothenbuhler said.

“Every time I go to 7-Eleven, we meet up with people there because there’s always students from South which is fun,” Rothenbuhler said. “Sometimes, we chill in the parking lot and listen to music while we drink our slushies.”

The best place to get a refreshing drink, according to Kubek, is BP. When it gets hot in the summer, the first place Kubek will go is BP for a slurpee or lemon water to re-hydrate for more fun in the sun.

“Before going on a boat, bike ride or just seeing friends in general in the summer, I have to have a cold drink in my hand from someplace in Grosse Pointe.” Kubek said.

According to owner of Jerry’s Party Store Jerry Stocking,the best time for students to stop in for a quick slurpee is in the summer, to once again refresh themselves from their summer festivities.

“June is our busiest month for slushie business,” Stocking said. “That’s usually when the majority of students do come in.”

Students frequently bring friends along on their slushie runs to grab a drink or  other snacks and items in the store, Stocking said. It is not only fun for the kids, but enjoyable for Stocking as well since it is good for business.

“It is a very common occurrence that kids come in with big groups,” Stocking said. “At times, sometimes we will have maybe four or six kids come in all at once.”