The Tower Pulse • May 3, 2019 • https://thetowerpulse.net/30668/featured-content/burns-be-gone-a-review-of-multiple-suncreens/

Burns be gone: a review of multiple sunscreens 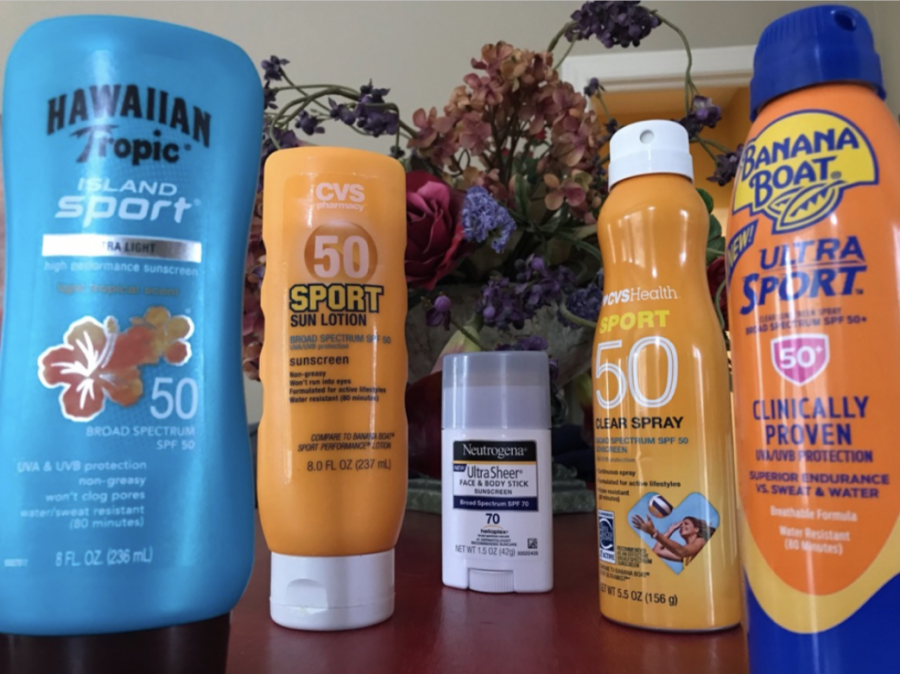 As summer approaches, half of the world gets excited about their long overdue tan while the other half ponders about what the minimum amount of clothes they can wear without getting a sunburn. Thus bringing up the discussion on which sunscreen the paler half should use to prevent them from receiving the terribly painful red mark.

I have been a long time member of the “no tan clan”, and spend more time thinking about sunscreen and how to prevent burns while also promoting the transition from a paper to eggshell skin color than one should. During one of these intense thoughts, I decided I should test a bunch of different sunscreens to determine once and for all which is the alpha. So, I did.

The sunscreen used most recently during a trip to the Caribbean proved unsuccessful because the inside of my belly button got burnt, therefore I journeyed over to the nearest CVS and purchased two different sprays, two new lotions and one face stick.

To keep the competition near the same level, all but the face stick were SPF 50 and brands I had never used before. Then I tested all contenders and judged each.

Hawaiian Tropic Island Sport Ultra Light was critiqued first because it had the most appealing bottle. This sunscreen came in lotion form so a few points were immediately deducted for the hassle and time applying it consumes, but that was its only drawback. This was the most pleasant smelling liquid anyone could ever lather on their body, yet took minimum time to soak completely into the skin, leaving no sticky traces behind.

Next was the Banana Boat Ultra Sport which was picked due to fond memories I had with a sunscreen that had banana in its name. Unfortunately, this was not that. Yes, it was effective in its job, but it had no “wow” factor to it. Normal smell, ok appearance. It was a spray but, like most sprays, it was slightly sticky after rubbing it in.

Contestant number three was none other than CVS Health Sport. I was not ecstatic about this purchase, but there was a sale so it was promptly added to the cart. However, I was took quick to judge this orange creature because it was the cheapest and had a surprise smell. When spraying a slight orange aroma filled my nostrils while the clear spray was almost unseen by the eye.

With the bit of confidence I now had in CVS brand sunscreen I moved on to their Sport Sun Lotion. This was a big mistake. Not only was it a strange consistency, but it also was extremely sticky/slimy despite saying “non-greasy” on the font of the bottle. To say this was a disappointment would be a major understatement.

Neutrogena Ultra Sheer Face & Body Stick Sunscreen was the last to be judged because I had previously used this product, however forgot what it was like, thus the necessity to re-test it. One bonus to this sunscreen is that it is pocket size, therefore it could potentially be the emergency stash hidden inside one’s swim trunks. I would strongly advise otherwise, but that’s simply my advice. What gets rubbed on is a sticky and very uncomfortable substance which is very good at making sure its wearer knows that is on. The entire time it was on my face I couldn’t stop thinking “I feel it on my face. Why is it on my face? Oh my goodness this is obnoxious please get it off my face!”

By the time the testing was over, there was a clear winner. Hawaiian Tropic Island Sport Ultra Light. There was nothing this magical cream could not achieve. Everything I wished for it had, and I could not be more joyed to know that this brand of sunscreen will be with me until it either discontinues or the sun disappears. I would recommend this sunscreen to anyone who is tired of the generic kinds of ultraviolet ray protection and really wants to experience what superior sunscreen feels like.