Recap of the NHL first round playoffs 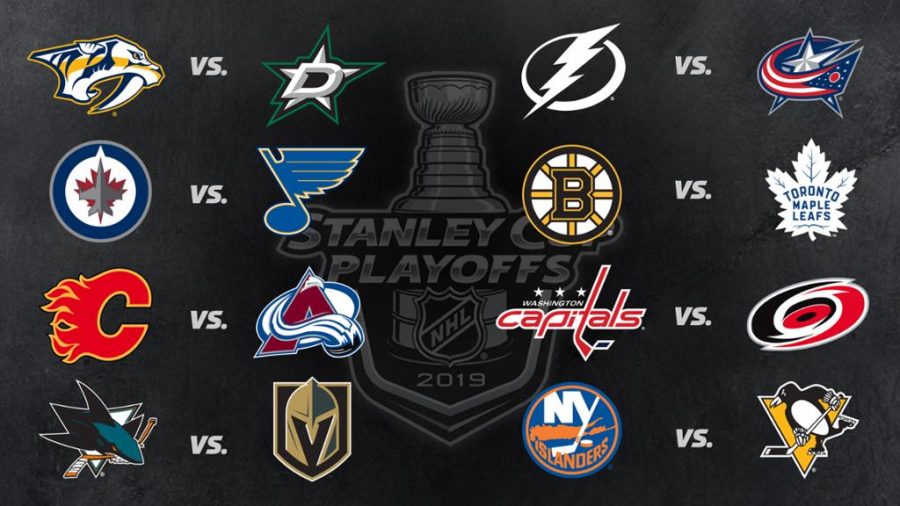 Photo courtesy of the NHL

Although the Tampa Bay Lightning had a record-breaking regular season, they were unable to perform in the playoffs and were swept by the Columbus Blue Jackets in four games.  The Blue Jackets were the last team to snag a playoff spot, and became the fourth team in NHL history to sweep the regular season’s number one seed in a best-of-seven series. The Lightning became the first team in NHL history to win the Presidents’ Trophy and be swept in the first round of the playoffs. Columbus’ Cam Atkinson, Matt Duchene, Seth Jones and Sergei Bobrovsky led the team to their first ever playoff series win, with a score of 7-3 in the final game on April 16. The Blue Jackets’ Alexandre Texier, at 19 years and 215 days of age, became the youngest player in franchise history to score a postseason goal, which he did in game seven. Grosse Pointe native and Blue Jackets defenseman Zach Werenski recorded one goal and four assists during the first round. The Lightning were without star forward Nikita Kucherov, who notched 128 points in the regular season, for game three due to his suspension for boarding Columbus’ Markus Nutivaara. Lightning defenseman Victor Hedman was injured in game two and missed the rest of the series. Hedman had 54 points in the regular season. In the NHL bracket challenge, 48 percent of participants projected Tampa Bay to win the Stanley Cup, and only 0.4 percent had the Blue Jackets as the overall winner. Only 3.5 percent of participants had the Blue Jackets moving past the first round, and only 0.24 percent said Columbus would sweep Tampa Bay. The Blue Jackets will face the Boston Bruins in the second round of the playoffs, beginning April 25 at 7 p.m..

Despite being in last place in the league in January, the St. Louis Blues were able to not only make it to the playoffs, but advanced to the second round. The Blues beat the Winnipeg Jets in game six of the series, with a score of 3-2 in the final game. St. Louis also became the first team in the NHL’s expansion era, from 1967-68, to win a playoff series after ranking last overall at any point after New Year’s Day. Blues forward Jaden Schwartz notched a hat trick in game six, becoming the fourth player in the franchise’s history to score a hat trick in a series-clinching game. Schwartz also became the second player in NHL history to score a natural hat trick in a series-clinching postseason game, joining Geoff Courtnall, who accomplished the feat in 1992. Jets forward Mark Scheifele became the second player in NHL history to average at least one goal per game through their first 12 career road playoff contests, notching 12 goals and five assists in 12 games played. The Blues will go on to face the Dallas Stars in the second round of the playoffs, beginning on April 25 at 9:30 p.m..

After a thrilling game seven, the San Jose Sharks triumphed over the Vegas Golden Knights with an overtime score of 5-4 on April 23. The Golden Knights led 3-0 at the midway point of the third period, however Vegas forward Cody Eakin was given a five minute major penalty and a ten minute game misconduct for cross-checking Sharks forward Joe Pavelski. The Sharks scored four goals in four minutes while on the power play, matching the NHL record for power-play goals in a single playoff period. Sharks forward Kevin Labanc scored one goal and notched three assists to match the NHL record for the most points scored in a single playoff period. Labanc also became the first player in NHL history to score four points in a game seven. San Jose was behind 3-1 in the series, and won four games in a row to overcome a 3-1 series deficit for the first time in franchise history. Vegas goalie Marc-Andre Fleury earned his 78th postseason win in game four to take seventh place on the NHL’s all time playoff wins list. Game six was the first game of the 2019 postseason to require multiple overtimes, which San Jose won in double overtime with a score of 2-1. The Golden Knights had 59 shots on goal in that game, the most the team has ever recorded in a single game. Also in game six, San Jose forward Tomas Hertl became the first player in NHL history to score a shorthanded game winner in a game that required multiple overtimes. San Jose will face the Colorado Avalanche in the second round, with their first game on April 26 at 10 p.m..

Although the Calgary Flames finished second overall in the league at the end of the regular season, the Colorado Avalanche, ranked seventeenth, were able to win the series 4-1, with a score of 5-1 in the final game. The Avalanche advanced to the second round for the first time since 2008. Colorado forward Mikko Rantanen extended his multi-point streak to four games, and Rantanen and Vegas Golden Knights forward Max Pacioretty both posted multi-point streaks of four games played in the 2019 postseason. The Avalanche’s top line, made up of Gabriel Landeskog, Nathan MacKinnon and Rantanen, combined scored eight goals and a total of 19 points during the first round. Avalanche goaltender Philipp Grubauer faced 134 shots across five games and only allowed nine goals. The Flames were ranked first in the western conference, making the 2019 postseason the first time in NHL history that the top two teams in each division or conference, or the two teams with the best records, have been eliminated in the opening round, the other team being the Tampa Bay Lightning. The Avalanche will be up against the San Jose Sharks in the second round, with the first game on April 26 at 10 p.m..

The Dallas Stars beat the Nashville Predators 2-1 in overtime in game six on April 22 to advance to the second round. Stars defenseman John Klingberg became the first defenseman in Stars history to score an overtime goal in a series-clinching game. Stars goalie Ben Bishop, after helping Dallas to victory, also became a 2019 Vezina Trophy finalist, an NHL award given to the player who is the best at his position. Nashville was unable to make it to the second round for the second year in a row; they lost to Winnipeg in round two four games to one. The 2019 postseason marks the 11th time that three or more division champions were defeated in the opening round; Nashville led the Central division, Tampa Bay the Atlantic division and Calgary the Pacific division. The Stars will go on to face the St. Louis Blues in the second round, with the first game being on April 25 at 9:30 p.m..

The Boston Bruins beat the Toronto Maple Leafs in game seven of the first round, earning their sixth consecutive series win over Toronto and NHL-record 15th game seven victory. Bruins defenseman Zdeno Chara appeared in his 13th game seven, tied with Patrick Roy and Scott Stevens for the most such appearances in NHL history. Chara, at 42 years and 30 days old, also became the second-oldest defenseman in NHL history to score a goal in the Stanley Cup playoffs, behind Detroit’s Chris Chelios, who scored in the 2007 conference finals at 45 years and 86 days old. Toronto forward Auston Matthews became the first player in franchise history to score five or more goals in a playoff series since Joe Nieuwendyk in 2004. The Maple Leafs haven’t won a playoff series since 2004. The Bruins will face the Columbus Blue Jackets in the first round beginning April 25 at 7 p.m., marking the first time the two teams have met in the playoffs.

The Carolina Hurricanes defeated the defending Stanley Cup champions in game seven of their series with a final score of 4-3 in double overtime. The final game became only the 12th game seven in NHL history to go to multiple overtimes. Carolina forward Brock McGinn scored the game-winning goal against the Washington Capitals, becoming the second player in franchise history to score an overtime goal in a game seven, the first being Scott Walker in the 2009 conference semifinals. The Hurricanes, who made their first playoff appearance since the 2009 postseason this year, became the 12th team in NHL history to push the defending champions to a game seven in the opening round. Carolina goalie Petr Mrazek, who played six seasons for Detroit before being traded to the Philadelphia Flyers in 2018, recorded a shutout in game three of the series. Carolina forward Sebastian Aho became the first player in Hurricanes history to score a shorthanded goal in a game seven. Washington forwards Nicklas Backstrom and Alex Ovechkin became the seventh and eighth players in NHL history to skate in at least twelve game sevens over their careers. The Capitals went without integral forward TJ Oshie after game four, when he fractured his right clavicle and had to undergo surgery after being cross checked into the boards by Carolina forward Warren Foegele. The Hurricanes will face the New York Islanders for the first time ever in the postseason beginning on April 26 at 7 p.m..

A year after acquiring 2018 Stanley Cup-winning coach Barry Trotz as their head coach, the New York Islanders swept the Pittsburgh Penguins in the first round of the playoffs. The Islanders beat the Penguins at home on April 16 with a final score of 3-1 to clinch a second round spot. According to NHL statistics, only 1.1 percent of bracket-makers projected the Islanders to win the Stanley Cup. New York swept a best-of-seven series for the seventh time in franchise history, doing this for the last time in 1983 against the Wayne Gretzky-led Edmonton Oilers. Islanders goalie Robin Lehner became the 13th goaltender in NHL history to win each of his first four postseason starts, and the first to do so since Michael Leighton of the Philadelphia Flyers accomplished the feat in 2010. Islanders forward Mathew Barzal became the fifth player in the team’s history to record an assist in each of the team’s first four or more games of a playoff year since Mike Bossy in 1981, who recorded an assist in each of the first five games of the postseason. Despite winning the Stanley Cup in both 2016 and 2017 and reaching the second round in 2018, the Penguins were unable to hold up against the Islanders, who recorded 103 points during the regular season. The Islanders will face the Carolina Hurricanes in the second round of the playoffs beginning April 26 at 7 p.m..

NOTE: The 2019 postseason marks the first time in NHL history that all four division-leading teams were eliminated in the first round of the playoffs. Tampa Bay led the Atlantic division and were beaten by Columbus in four games, Washington topped the Metropolitan division and lost to Carolina in seven games, Nashville won the Central division but were bested by Dallas in six games and Calgary led the Pacific division but lost to Colorado in five games.

All information courtesy of the NHL and its resources.