Free Solo will rock your world 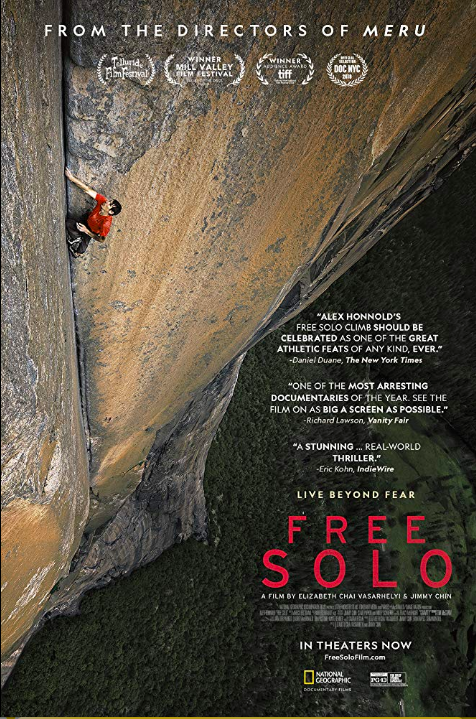 Imagine climbing a mountain with no ropes or anything  to secure you. For free solo climber Alex Honnold, this is just a typical excursion for him.

The documentary, “Free Solo”  follows Alex Honnold, a free solo climber who takes on the challenge of climbing El Capitan– a 7,569 feet tall rock in Yosemite National Park. Free solo climbers are one of the risker types of climbers out there. They climb rocks and mountains without ropes or equipment; it is just them and the rocks beneath their hands and feet.

I’m not one who is easily entertained by documentaries, but this one  caught my attention from the very beginning. It was insightful and not boring like some documentaries can be.

Throughout the documentary, there was a good balance between the science of free solo climbing and the story behind Honnold and why he felt a connection to this type of dangerous climbing.

The documentary kept me on the edge of my seat because of the continuous suspense. The shots and camera angles that were taken during the actual climb were somewhat extraordinary; the recording crew went to  extreme limits to get incredible footage of Honnold during every step of his climb.

There were shots that were taken a thousand feet off the ground and the camera was so close to Honnold during his excruciating climb that you could see the chalk on his hands and the sweat on his face.

There were also some scary moments to the documentary as well. At certain points, you were in the blind just like the crew who were  watching Honnold climb in the moment. You, like his crew, didn’t know when or if he was going to fall to his death. The suspense was unbearable as you watched Honnold gradually make his way to climb El Capitan in a staggering 3 hours and 56 minutes.

What I enjoyed about this documentary wasn’t just that there was live footage of Honnold completing the climb, but it also explored   his backstory and the preparation that went into the climb.

We got to see how his mind and brain worked and what compelled him to become a free solo climber in the first place. It was interesting to see his daily routine and the time and effort he put into making sure his climb would go as successful as he hoped.

As eye-opening as this documentary was on the topic of free solo climbing, it made me realize how crazy the world is and how daring Honnold really was to put his life on the line to reach a lifelong goal to climb El Capitan with just the support of his hands and feet.

Overall, I really enjoyed this documentary and would recommend it to all. Free Solo is available to for viewing on dvd or on demand.