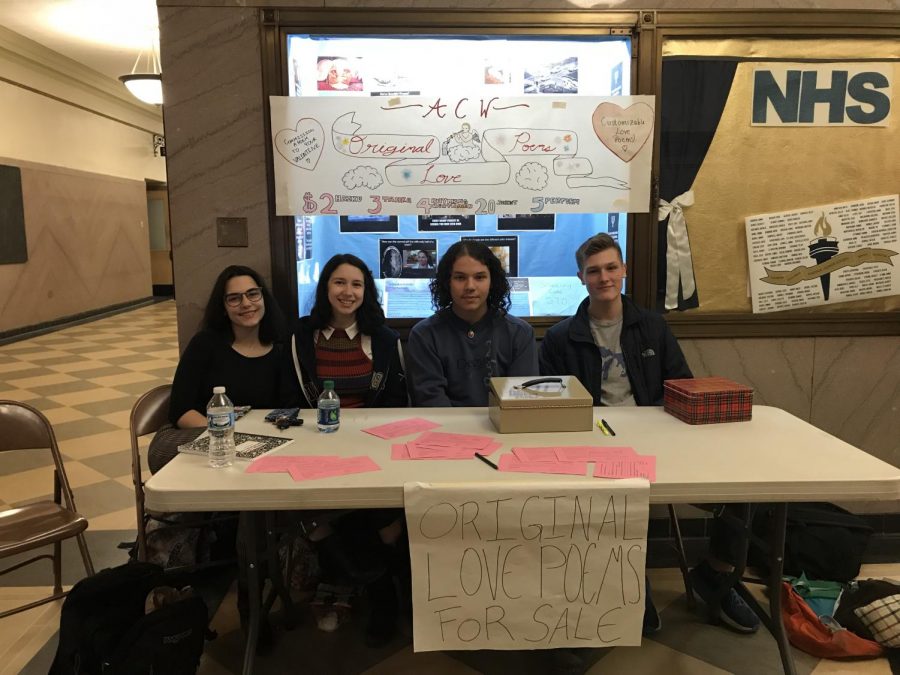 Students spend their lunch writing and selling poems for fundraiser.

Valentine’s Day is a day full of thoughtful, loving gestures, and the advanced creative writing class (ACW) helped spread the love at South this year. But due to the number of snow days received the weeks of January 28 and February 4, the ACW had only days to prepare.

The class created a fundraiser for their annual trip to Mackinac Island, where it participates in a slam poetry competition for the first time this year.

The event was a surprising success, raising close to $600 according to teacher and advisor Harry Campion.

The class generated a personal Valentine’s Day Poetry order form, which included; the relationship status, the type of poem and a few details to be celebrated about the individual in the poem.

Prices ranged from $2 to $20, with Haiku being the least expensive, and a Sonnet being the most.

“We have a slip that people fill out to help personalize the poems, but each poem is its own, unique poem that isn’t even remotely similar from others, which is awesome,” Joëlle Reich ’19 said.

The class was surprised to see the excitement of the students and put in a lot of work to prepare for the writing and delivery of the poetry Campion said.

“Emilio Garcia and I worked two hours a day writing poems,” Reich said. “Then the class worked one hour a day and the rest of the time we all worked three and a half hours on Mondays.”

According to Reich, the time the students spent constructing the poems are shown in the thoughtfulness and personalization that was necessary to create unique poems.

“All the poets were really willing to help and I think part of it is that there is a really big payoff in being able to make all of this happen in such a short amount of time,” Emilio Garcia ’20 said. “We had little to no preparation time in terms of getting everything ready for this, but we pulled everything together in less than a week.”

Reich said she was surprised to see the number of sonnets that were requested, but they are happy to continue writing and delivering the poems.

“We had a few people who ordered them for their friends,” Reich said, “It’s about people spreading love to other people and I’m so thankful I get to be part of it and actually write it and see what people say about who they love.”

Bridget Keane ’20 purchased a Haiku poem during 1st lunch.
“The purpose was to give one of our best friends a laugh and maybe embarrass her a little bit,” Keane said. “I’m excited but nervous for my friend to receive the poem because I think she will find it funny, but also know it was me who sent it. I think this is an awesome idea.”

Garcia said he hopes that he can continue with the fundraiser next year and make it an annual fundraiser for the class.

“I’ve got to say I can’t believe how enthusiastic everyone was,” Garcia said. “I’m so happy we were able to write poems, and based on who the subject was and the reason they were being celebrated, there was a lot of creativity and thought given into each poem written.”