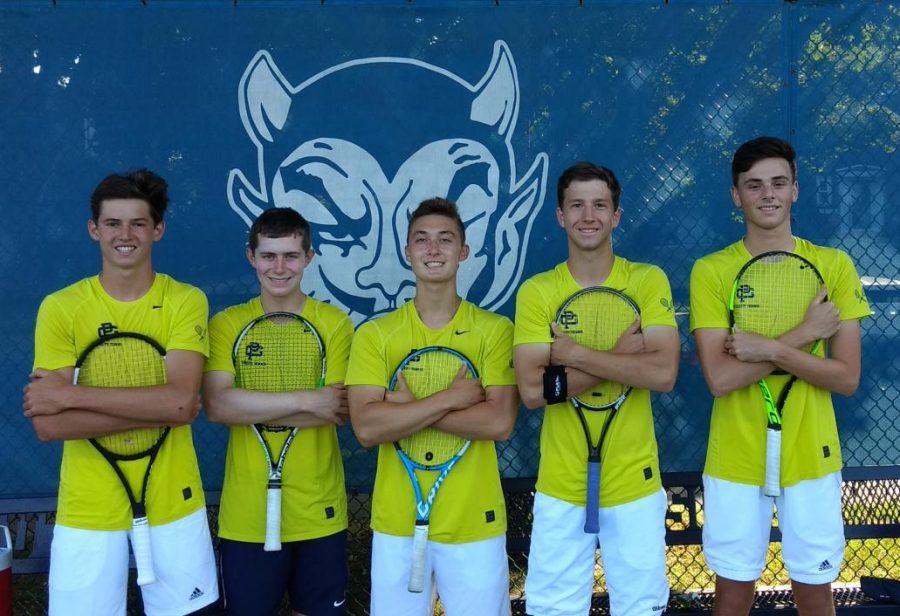 The boys varsity tennis team is having one of their best seasons in ten years, according to Coach John Willard. This year, the team has amassed nine wins, three ties and zero losses, along with winning the MAC Red division throughout their fall season.

“Our goals for the rest of the season are to win the regional tournament, which is something we haven’t done in a very long time, and to finish as one of the top 5 teams at the state tournament where we normally finish ninth or tenth,” team captain Michael Kuchta ’19 said.

The state tournament will take place on Oct. 19 and 20 at the Greater Midland Tennis Center in Midland. In the past ten years, the best the team has finished is in eighth place, according to team captain Michael Willard ’19.

“We have a lot of experience in this year’s team, which has equated to winning a lot of close matches,” Michael Willard said.“The experienced players have not only been playing well themselves,but they have also been able to help the underclassmen to elevate their level of play.”

The team has a strong roster this year, according to Kuchta, which in turn gives the team an advantage against other teams that have outplayed them in past years.

“Our team also gets along really well and we are all very close, which I think helps a lot more than you would expect,” Kuchta said. “Especially when you’re in a close match, knowing you have your teammates to cheer you on is a big help.”

The season, which is unofficially twelve months long, according to John Willard, is a motivating factor in their success. The dedication shown during the official off season makes for a strong team when it comes time to compete, Willard said.

“The experience we have is crucial to our record. This year, we have six seniors in our 14 man lineup,” Kuchta said. “However, I think the talent of the underclassmen on our team is what really puts us above other programs that are usually better than we are.”

The team only lost three seniors last year, according to Michael  Willard, and along with the strong bond, the team works hard in the off season. Michael Willard feels this is the crucial difference between a loss and a win in a match, truly benefiting to the positive outcomes of this year’s season.

“They have been a fun team to coach because I’ve gotten to know the boys so well, which is very enjoyable. We’ve grown as a team together for years now,” Coach Willard said. “The seniors will be missed greatly next year.”