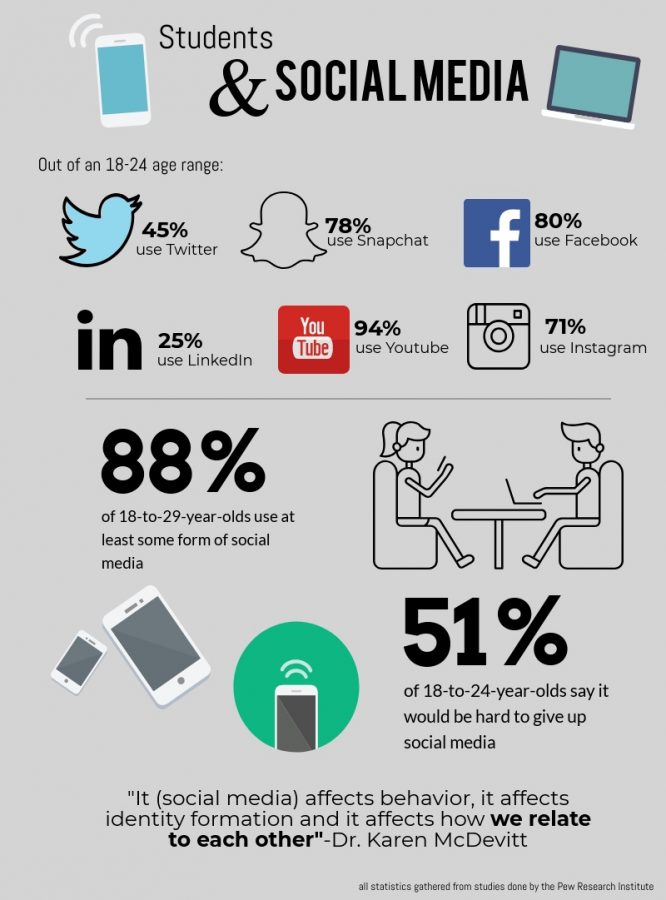 Social media is a highly prevalent form of communication in today’s society, specifically with younger generations such as current high school and college students. Studies conducted by the Pew Research Center in a 2018 survey found 88 percent of 18 to 29-year-olds use some form of social media.

However, the use and presence of social media within this age group will most likely change as high school graduates transition into college, according to Dr. Karen McDevitt.

McDevitt is a Masters Program Director in Wayne State University’s communication department. She has been studying new media, and subsequently social media, for 25 years. McDevitt believes social media is an inescapable form of identity for high schoolers.

“It affects behavior, it affects identity formation and it affects how we relate to each other,” McDevitt said.

Abby Hurst ’18 will be attending Michigan State University (MSU) in the fall. Currently, she checks her social media every day and uses it to keep up with friends, events and to read news.

“Ever since getting social media accounts, I feel a lot more in touch with what people are doing,” Hurst said. “It’s been really important to me throughout high school.”

Jack Jordan ’17 recently finished his first year at the University of Dayton studying pre-med. He found himself with less time for social media use as a college student.

“I don’t have time to goof off as much as I did in high school,” Jordan said. “So I took the time I used to goof on social media and now I’m putting it toward studying.”

“Because of the time constraints, most of my students are working and going to school and they don’t have the time to maintain the same online presence as they had when they were in high school,” McCormick said.

However, McKenna McGraw ’17, who is attending Miami of Ohio, said she has been using social media more since she started college.

“Before I wouldn’t post anything, but now sometimes if it’s a really nice day on campus I’ll post a picture with the nice weather or something like that,” McGraw said. “It’s also networking. So you follow people and then they follow you back more frequently in college.” 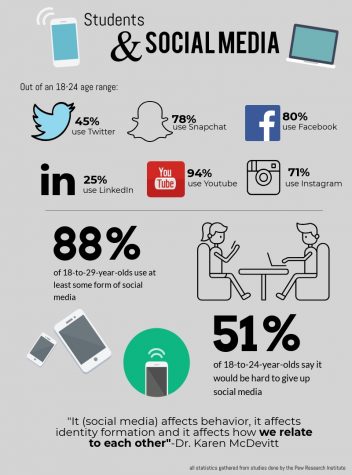 Hunter Levine ’18 will attend the University of Michigan in the fall. He thinks he will have less time to go on social media, but sees himself using it more in college.

“I’d probably use it more,” Levine said. “I’m going to be a freshman at a new school and I want to meet new people and talk to them.”

According to McDevitt, social media has made a difference in how high schoolers approach their transition to college.

“If students are going away to college, social media becomes a connection between friends they have left as well as friends they’re making,” McDevitt said. “Because of social media we all have a presence online, so in effect we can look up anyone at any time.”

McGraw said as a college student one app she found herself using more was Facebook.

“You use it to update your family back home,” McGraw said. “You also use it to network once you get into your school. So you Facebook a lot on probably your classes’ Facebook page,  if you’re looking for a roommate, that’s how I found my roommate.”

McDevitt and McGraw both said another website college students start using more is LinkedIn. They each emphasized the importance of setting up a social media site as a professional.

“That’s specifically for networking for a job,” McGraw said. “So we started our own online resume so we can start connecting with professors and other teachers… so they can connect on there and recommend you.”

Hurst, however, doesn’t see herself using any new social media apps or getting rid of any she already has when she’s at college.

“Honestly, I only have two social media accounts I check regularly, so I don’t see myself cutting down on websites I use,” Hurst said. “I want to cut down on social media use, so I probably wouldn’t join any new things.”

McDevitt believes social media use can be more tricky in college because there are increased opportunities for risky behavior. However, she thinks it can be beneficial as social media makes it easier to keep in contact with old friends.

“I think it’s a good way to preserve friendships you’ve made in high school,” McDevitt said.

“I use Twitter a little bit more than I did in high school,” Jordan said. “I use Snapchat to keep in touch with my friends who are at other schools, so I have streaks with them. And Instagram too, it’s basically the same thing. It’s mostly just keeping up with old friends.”

“Facebook, I definitely use it to keep in touch with my aunts and uncles, so they can all see photos,” McGraw said. “I post to Instagram because that’s what mostly high schoolers use, so people back home can see it that way too.”

Levine is currently on social media every day and mainly uses Snapchat and Instagram.

“I think I’m just going to keep using those (in college),” Levine said.

Hurst sees her social media presence changing once she’s at college because she will be connecting with new people at MSU and making new friends.

“I think I will probably still be checking it everyday, but I’ll be looking at different things now and my interests are going to change so the things I look at will be a lot different,” Hurst.

McDevitt said one major change of having a social media presence in high school versus college is the introduction to the working world.

“Most students in college will at some point either work part-time or start working full time at graduation,” McDevitt said. “Employers are looking at your social media presence and calculating really whether or not you are a good fit for their team.”

McGraw is aware of this and maintains her social media accounts, specifically Instagram, to appeal to potential employers. She makes sure her posts look nice because she knows others will be looking at them.

“I’ve definitely changed the way I update on Instagram. You pay more attention to what you post because you also know the school is on there and future employers will be looking at your stuff,” McGraw said. “There are some interviews I’ve heard that potential employers will ask for your social media, so they can look at it and see how their company would be represented.”

Jordan is more conscious of the repercussions of making a mistake on social media.
“I’m a little bit more careful about what I post, especially because I know I have future prospective careers and stuff looking at me,” Jordan said. “So I’m not posting anything stupid.”

“As a freshman, you’re anxious to make new connections and by the time you’re a senior, or graduating from college, you’re more likely to be engaging with potential employers,” McDevitt said. “Not only jobs, but also connecting with networks in your field.”

Although social media is beneficial to Hurst, she also recognizes the potential negative aspects of it.

“I think people have this stigma that sometimes you have to present yourself a certain way to an audience of people that you don’t really know,” Hurst said. “And that’s not really the case but a lot of us like to present this positive image when not all of our lives are necessarily positive at times.”

In her courses, McCormick utilizes a book called “The Shallows” which conveys how constant internet use can affect the brain. She thinks this could make students more hesitant about their online presence.

“As you use the internet, you make quick micro-decisions about what you’re gonna click, and you’re skimming because you’re not really reading online,” McCormick said. “It actually changes the physical neuroplasticity of the brain so it has a harder time doing deep reading or thinking where you have to maintain depth of concentration for long periods.”

According to McCormick, the websites and social media outlets college students use depends on the student individually.

McGraw thinks a high schoolers’ online presence changes as they go into college because of the differences in each social environment.

“In high school, I think a lot of it is how you’re perceived by your classmates so you try to make it (your social media) as impressive as possible,” McGraw said. “But once you get to college, you’re all in the same boat. You don’t really need to impress too many people.”

Hurst, however, sees new college students changing their social media presence as a way for a fresh start.

“They have this idea that high school is ending, college is starting, this is a brand new chapter of their life,” Hurst said. “So a lot of people are going to delete things they don’t want other people to see and try to start a new image of themselves. By deleting all of these photos of you in high school, people don’t have this previous idea of what you were like.”

According to the aforementioned survey done by the Pew Research center, researchers found that 78 percent of adults, aged 18 to 24, use Snapchat as a social media platform.

McGraw consistently uses Snapchat streaks as a form of communication yet isn’t solely dependent on them.

“I have streaks with a bunch of people from back home. It’s just because we Snapchat everyday, so I don’t care if it goes away,” McGraw said. “I have streaks, but it’s not with the intention of having a streak and maintaining that streak.”

Hurst thinks it’s important to keep a positive relationship with social media, like posting things to be proud of and refraining from using social media as a tool to harm others.

“We should try to make social media a more healthy environment rather than creating a negative stigma because there are some positive aspects to it,” Hurst said. “But a lot of people have a hard time with that because they’re only thinking of the negatives.”

McDevitt said that overall, social media use and presence should definitely change from high school to college.
“It shouldn’t stay the same,” McDevitt said. “There’s a lot of advantages to social media. So it’s a different type of connection than it used to be.”

McCormick believes that as a person changes, their social media presence changes.

“Everybody’s in a different path, in a different point in time on their journey in life,” McCormick said. “So as a person ages, or changes, or makes new friends or travels or has new experiences, they grow and that’s reflected in the content they post.”