The Tower Pulse • May 4, 2018 • https://thetowerpulse.net/28533/entertainment/controversy-arises-with-kanye-wests-political-views/ 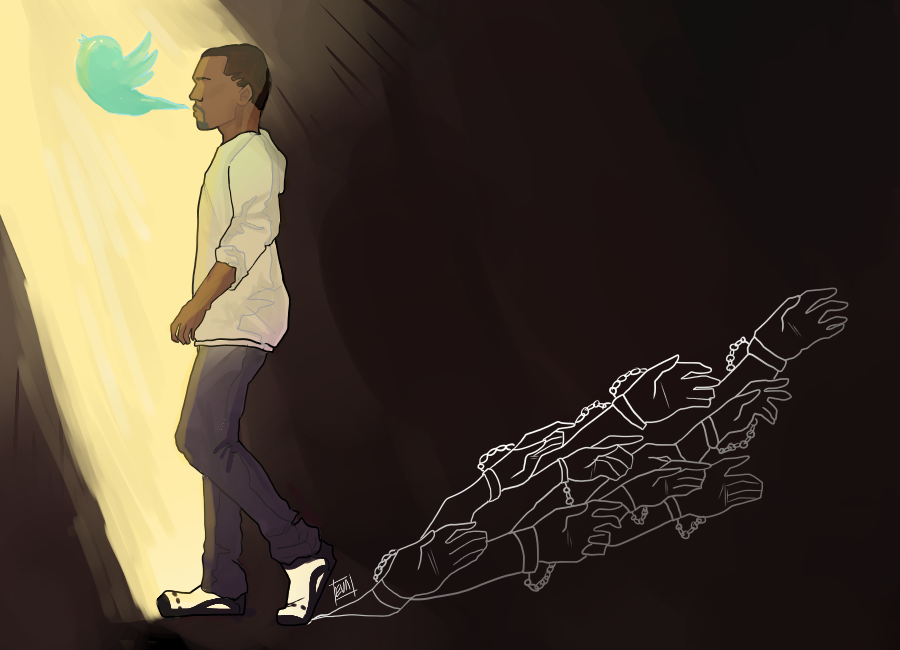 Ultralight Beam was once one of my favorite songs; Kanye’s musical brilliance within the lyrics, the rhythm and the vocals made it a timeless song that I could always play. However, due to his recent comments, it will never be one of my favorites again.

The frenzy began when Kanye tweeted a picture of him wearing a “Make America Great Again” hat, associating himself as a supporter of President Trump. Immediately, the internet criticized him for being a black man and supporting a man who has publicly made several racially-charged comments.

I am a strong proponent of freedom of speech, and I commend Kanye for sharing such a strong opinion on his social media, knowing that his large audience would fire back heavily. Especially with the activism found in the youth of today, Kanye should be aware that such consequences will emerge.

I agree with Kanye in his ideas that a lot of people are taught how to think. They eventually lose the motivation to craft their own, unique opinion after being taught what to think all their life. My problem with Kanye’s recent statements is not that he is voicing an opinion opposite of mine, but is due to the medium through which he is defending his claims.

Personally, I think Kanye is disrespecting himself by throwing his support to a man who has made offensive statements targeting the black community countless times. If Kanye wants to disrespect himself and his race by endorsing Trump, that is his decision. He has lost my respect, but the bottom line is that he still has the right to freedom of thought and his political beliefs are his decision.

Kanye tweeted that he is refusing to be “enslaved by monolithic thought.” His main objective is to create a revolution of free speech and original thought by refusing to conform his opinion to agree with the general public. I completely agree that an abundance of youth are having their beliefs manipulated by those around them.

Even though Kanye supports Trump, of whom I am not the biggest fan, we can agree to disagree. Celebrities often receive a lot of hate for speaking their opinion because they are always in the spotlight. I don’t understand why people discredit celebrities when they share controversial political views. If anything, the celebrities should be praised for taking such a strong stance and practicing their freedom of speech.

However, during Kanye’s interview with TMZ, he said that slavery was a choice, and that was when I lost all my respect for Kanye’s movement. To publicly state that the enslavement of African Americans for 400 years was a choice they made is severely insulting. The ancestors of the black community endured years of agony and anguish because they had no other choice.

Kanye claims he is an advocate for freedom of speech, yet he is forgetting about his fans who are being silenced. Many of Kanye’s fan started listening to his music because he identified with the struggles of being black in America. He was a prominent voice for the black community, but he betrayed them by supporting an ignorant man who is intolerant to many people of color. Now, the black community is lacking his voice to speak up for them.

Even though I disagree with Kanye’s political alignments, he clearly represents the movement of individualism and originality, and I praise him for that. On the other hand, his advocacy for this inspiring movement does not justify his offensive comments about slavery being a choice.

Although I do believe Kanye is a creative genius in the music industry, his insulting comments curtail my support. Regardless, I think I’ll make Kanye proud when I use my freedom of speech to campaign against Kanye 2020.