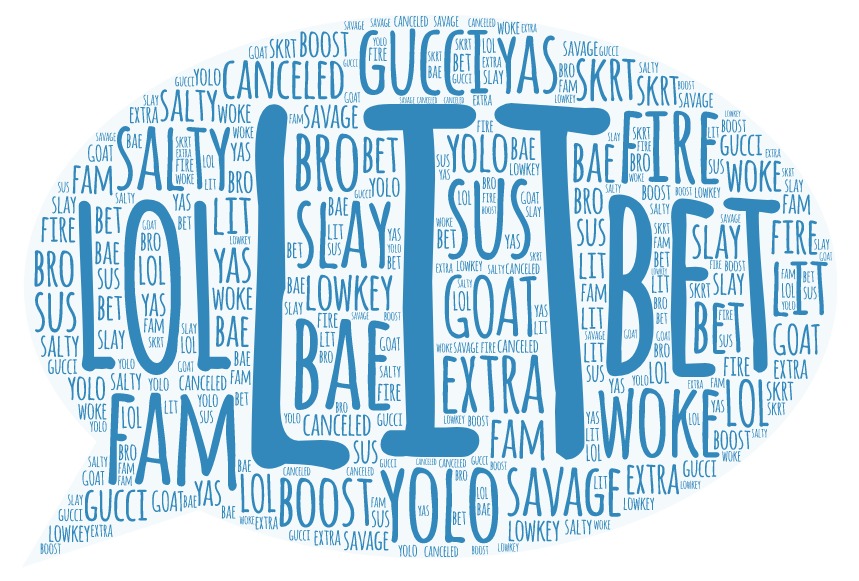 It’s heard everyday bro. It’s used highly amongst young adults. Slang. According to Urban Dictionary, slang is the ever-changing use and definition of words in informal conversation, generally using references as a means of comparison.

“My understanding of slang is words that come into popularity in the English language. I would say they are kind of memetic, like memes, but they’re words,” English teacher, Danielle Peck said.

According to English teacher, Kevin Cox, slang can include spelling variations and is constantly changing as society does. That’s why students should be comfortable with “code-switching”.

“Code-switching would be that ability of anyone to consider what type of language to use with what group they’re communicating with,” Cox said.

Nicholas Mangrum ’19 said he uses slang because it spices up conversations and makes them more interesting.

“Some people aren’t educated enough to use bigger words, so they make them shorter. People are just lazy,” Mangrum said.

According to Cox, as he becomes more removed from some of the elements in popular culture he finds it harder to follow the trendy language.

“Some of the words have the exact opposite meaning of what I would assume,” Cox said. “For example, Netflix and chill, I assumed had a gentler connotation than most people interpret it as.”

According to Splinter News, Netflix and chill is a viral catchphrase that spread on all social media platforms. Although the term itself seems innocent, it’s a euphemism for sex and ‘hooking up’.

According to Alyssa Cole ’19, she uses slang on a daily basis, either talking with her friends or on social media, like on her Instagram captions.

“With the rise of social media and the use of slang by a wider range of groups and ages has permeated it through the culture. It’s so easy for slang to spread now,” Cox said.

According to Cole, she uses slang because she feels it makes her sound cool and her friends think she’s funny when she uses it.

“I was trying to figure out how to use the word ‘lowkey’ and it sounds really dorky but I think it’s really interesting,” Peck said.

According to Peck, as a teacher, she believes she is more exposed to slang compared to her other friends who aren’t teachers. She also converses with other teachers on the meaning behind certain slang. Students tend to separate the language they use in the hallways and the one they use on assignments.

Peck believes it is possible for students to use slang in their writing as long as it’s done properly and effectively.

“That can make your writing more interesting,” Peck said. “I know it’s a strange thing to say but I wish students would feel freer to use more of their voice.”

Cole believes slang is important because it’s a big part of being a teen.

“All teenagers should know about slang because it’s a good thing to be aware of and to know how to use properly because you’re only a teenager once and when you’re an adult you have to be mature,” Cole said.