South alumni look back on the 1968 MLK visit to South 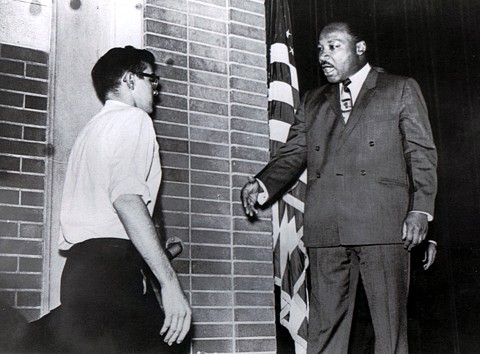 Streets filled with protesters, police cars coming down the streets and excited and respectful people filling the area were all a part of the day when Martin Luther King Jr. came to speak at Grosse Pointe South High School.

The mood in Grosse Pointe at that time was very high and energetic, according to John Denler ’68.

“Grosse Pointe was very tense. Probably the most tense I’ve ever seen it, and I grew up here. The Civil Rights Movement was underway and the Civil Rights Act was only a few prior, and Detroit had just weathered the riots,” Denler said. “(That) year was very much on edge. All of the Pointes in ‘68 were much more white than they are today.”

Not only was the energy high, but strong tension was felt in the community as well, according to Bob Button, retired Tower advisor.

“It was a period of a great deal of tension,” Button said. “It was also a great period of excitement and very much played into what a lot of young people were dealing with at that time.”

Although not being able to attend the speech, Button said the support for Dr. Martin Luther King Jr. was very high, and respect was shown by most people in the area.

“The thing that I remember most about it was the tremendous support for (the speech), in a community that had not been open to Civil Rights and integration,” Button said. “Although, there was anger and frustration from the protesters who lined the streets. Many of them got into the gym and tried to disrupt the speech. They were very vocal, but they were not popular.”

Teen rebellion during that time period was very high, and not accepted by the older generation, but the speech brough an understanding to the community, according to Button.

“I think the older generations had not moved as far and were not moving as far or as fast as the younger generation. The 60s age was a time of youth rebellion in a major way, and they were arguing for and pushing for things that the older generation had never accepted and saw no reason to accept,” Button said. “But I think that the impact of the speech and King’s remarks, what he had to say in the speech, did much to at least move people to understanding and accepting that point of view for the first time. Probably the first time that those views were really brought into the community in a major, significant way.”

Bringing peace together in communities and unity, according to Denler, was the main idea of the speech King wanted people to understand.

“I was not able to attend, but from what I understand, his speech and points were about peace among races, working together, everyone be human and togetherness,” Denler said. “It was about evolving together as humans to bring betterment to the communities.”

Between the two different political groups, people who came from Grosse Pointe to see the speech take place came out of respect, according to South alumni, Tom Ludwig ’69.

“The group itself was definitely an outside group and my impression of the Grosse Pointe residents who attended, did so out of respect and desire to hear a great man speak.” Ludwig said.

According to Denler, the community altered for black people in the area, and became somewhat more accepting than before.

“There was a marked decline in tensions. There was a greater degree of acceptance, not totally though,” Denler said. “Down here in the Village, it was a totally different place 50 years ago.  People kept an eye on black people in shops. There wasn’t total acceptance. We got away from that. In large, I think they were more accepting not of just black people, but of all people.”

The Tower staff took their stance on the racial subject by doing work with Denby High School in Detroit, according to Button.

“The Tower staff worked out an exchange with the newspaper staff at Denby High School in Detroit, and the first step was for the Tower staff to go over to Denby and to join up with the newspaper staff and attend classes and share lunch and to spend the day with students there,” Button said. “Among South students, there was a huge fear of the unknown as well as excitement at the possibilities of when they into the library at Denby. They were talking about popular culture, they were finding out that they had all kinds of things in common, that they had no idea was there.”

Students at school were not as interested in the speech as much as other people, and didn’t get political, according to Denler.

“The athletes, which were the kids I was basically hanging around with, we didn’t give a hoot,” Denler said.

Even though not everyone had the same excitement about a legend coming to speak in their neighborhood, the people who witnessed the speech were enthusiastic, according to Button.

“When they got to the Martin Luther King speech itself, there was a great deal of enthusiasm to be apart of the experience,” said Button.