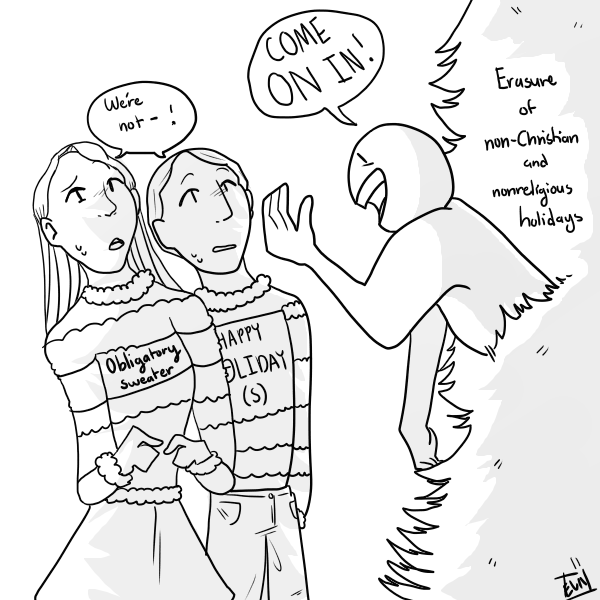 The gentle flashing of rainbow bulbs.  A gentle flurry of snow.  The ever-persistent Mariah Carey.  All are staples of Christmas itself, with about nine-in-ten Americans celebrating the holiday, according to Pew Research Center.  However, some students feel a little out of place during the rush of the Christmas season: those who don’t celebrate the holiday.

“We celebrate Hanukkah for all eight days and nights,” Miranda Freedman ’21 said.  “But on Christmas, we just get Chinese food; it’s the only thing that’s open.”

According to Freedman, being Jewish amidst the festivities results in a fairly quiet-spirited celebration, with her family often simply renting a movie together or making different types of hot chocolate.  Freedman occasionally feels as though she must defend her own holiday to others.

“For Hanukkah, people get gifts, but gifts shouldn’t be the focus,”  Freedman said.  “The story behind Hanukkah comes specifically from celebrating the oil that fueled the Temple’s menorah; it’s about being together and celebrating what the miracle gave to the Jewish people.”

On the other hand, some families prefer not to celebrate any holiday at all, and rather have the event center around harmony and togetherness.  According to Abraham Abouljoud ’21, some pay too much attention to the concept of Christmas itself, rather than who they are celebrating with.

“We celebrate fairly similar, except we don’t go to church,” Abouljoud said.  “Some people make a pretty big deal out of it all.”

Despite admitting to the similarities, Abouljoud feels the way his family celebrates during the holiday season is special in its own way, with the primary focus being on emphasizing the closeness of family.

“I get to see a lot of my cousins that I don’t get to see that often otherwise,”  Abouljoud said. “It’s really fun, and it’s nice to be around my whole family.”

According to a study conducted by Pew Research Center, the differences in the ways people celebrate Christmas stems primarily from age, with younger children less likely to incorporate religious elements into their celebrations.

“Eight-in-ten non-Christians in America also celebrate Christmas, but most view it as a cultural holiday rather than a religious occasion,” the study said.

According to Freedman, one must remember that the season is a time to be dedicated to not the presents, but the love shared among family members.

“When I was younger, my family would have a giant party where we would have a giant game of dreidel, and all of the younger kids would have fun for a while,”  Freedman said.  “Eventually the adults joined too, and everyone felt really connected and a sense of togetherness.  It’s what the holiday season is all about.”