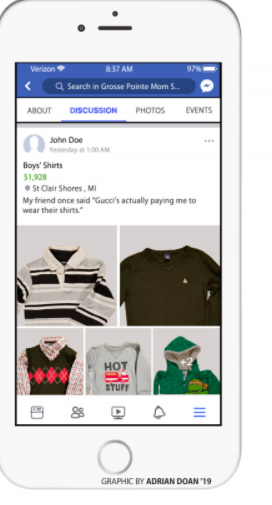 Maybe it’s a dress that hasn’t fit since Elementary School or some stuffed animals that have been sitting in a box for a few years. For some these would be pieces of junk taking up space, but for Kendall Volpe ’19, this seemingly random stuff is an opportunity to make some money through Mom Swap.

“I use Mom Swap because I have a lot of old clothes or things I don’t need anymore that I know younger girls would want,” Volpe said. “Then I also can get some money for it.”

Mom Swap is a community group organized on Facebook that allows members to sell and trade items; although it started as just a small group four years ago, it has since attracted a lot of new members, including some South students.

“I started using Mom Swap eight months ago and I actually had to stop using it for a little while because I got kind of addicted to it,” Volpe said. “Mom-Swapping is so much fun.”

The original Mom Swap group on Facebook became so popular that it had to become more restricted; in response to this, Alison Johns started a Grosse Pointe Mom Swap 2.0 group of which she is the administrator.

“The first Mom Swap reached a cap on members,” Johns said. “So I started the 2.0 to be more open to any members and keep expanding the group.”

Johns started using Mom Swap three years ago as an alternative to Craigslist and has seen its popularity spike as people flocked to the community organization. She has also seen the group evolve as it became more popular.

“I think Mom Swap started as just a way for some moms in the community to swap and sell things they did not need anymore,” Johns said. “But it has really expanded to include others, like high school students and dads.”

Johns sees another advantage in Mom Swap in that local businesses can take advantage of it; something Johns has done herself with her local honey business.

“Mom Swap is a great way of getting your business out there which is what I did with mine,” Johns said. “By putting it out there I could expand my business but still keep it within the community.”

After seeing how Mom Swap helped grow her business, Johns decided to start a group that combined Mom Swap with local businesses to help them grow.

“After I saw how it helped my business, I wanted others to be able to promote their businesses locally too,” Johns said. “To stop it from interfering with everyone else on the normal Mom Swaps, I started a Business Owners group.”

The normal Mom Swap groups preferred to keep it limited to items like clothing, furniture, toys and other things that you could find at a local garage sale, according to Johns. But she said both the original and her business version group both help the community.

“Mom Swap is really nice for anyone in the community because you can easily communicate with other people selling stuff locally,” Johns said. “Just like that, I wanted our local businesses to have a place where they can build their business within the community.”

This idea of community is one of the strongest incentives to use Mom Swap, according to both Jones and South students who use it.

“I needed to get rid of some clothes that I did not use anymore and I chose Mom Swap because it’s local it gives this nice sense of community,” Grace Foster ’18 said.

From people with too many old toys to those with local startup companies, the Mom Swap groups have expanded to fit in almost all members of the community in a convenient way, according to Johns.

“The great thing about these Swaps is that instead of communicating with strangers like you would on a site such as Craigslist, you can be swapping with your neighbor or people you go to school with,” Johns said.