It’s not a rarity to look around everyday and see people with a cell phone in their hand, especially students. However, appropriate use of your cell phone goes beyond playing too many games.

Cell phone usage has become something everyday people are used to as it is now the primary source of communication. 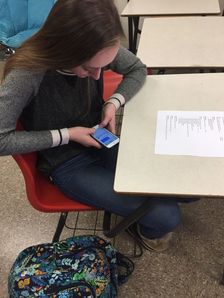 “I wish that I would put my phone away. During homework when I’m on my phone it distracts me from getting my work done,” Anna Ludvigsen ’20 said.

Phones may be a distraction, but there are ways to prevent having one’s attention drawn away from what they should be doing. Hanna Ottaway ’20 has a plan to help her reduce the amount of screen time.

“I use the app “Moment” and it tracks the amount of time I’m on my phone and I set limits for myself each day,” Ottaway said.

Ottaway also said that she sets the limits lower as the days go on. She has decreased the amount of time she is on her phone by fifteen minutes a day over the course of two weeks. While using this method can be effective, there are other simple ways too, according to Ludvigsen.

“I think that I’ll start, you know, putting my phone away while I’m doing homework,” said Ludvigsen.

Despite the fact that cell phones can be a distraction, they also have their benefits. For example, there are many applications on devices that can be helpful, whether it’s an application like Ottaway’s, or a calculator according to Doug Roby, Grosse Pointe South’s physiologist. 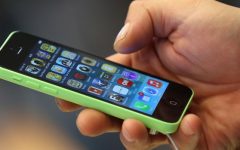 I use the app “Moment” and it tracks the amount of time I’m on my phone and I set limits for myself each day.”

“It’s without question a useful tool. It can be very helpful, especially in school, because you have lots of applications on your phone which can contribute to your success at school,” Roby said.

Roby also mentioned ways that using a device, cell phone or smartphone are beneficial, such as taking pictures of teachers’ white boards with upcoming homework assignments.

According to Pew Research Center, 88 percent of teens have access to or have a cell phone and 90 percent of those teens exchange texts. An average teen sends and receives 30 texts per day.

“Time on your cell phone, tablet, becomes an issue if it’s detracting from your output at school,” Roby said

Roby added that each person needs to look at how the usage is impacting their life. One of his philosophies is using technology in moderation.

“It’ about moderating the level of usage. If you can say at the end of the day ‘my technology time did not impact my output production at school, then conclude that it’s ok,” Roby said.