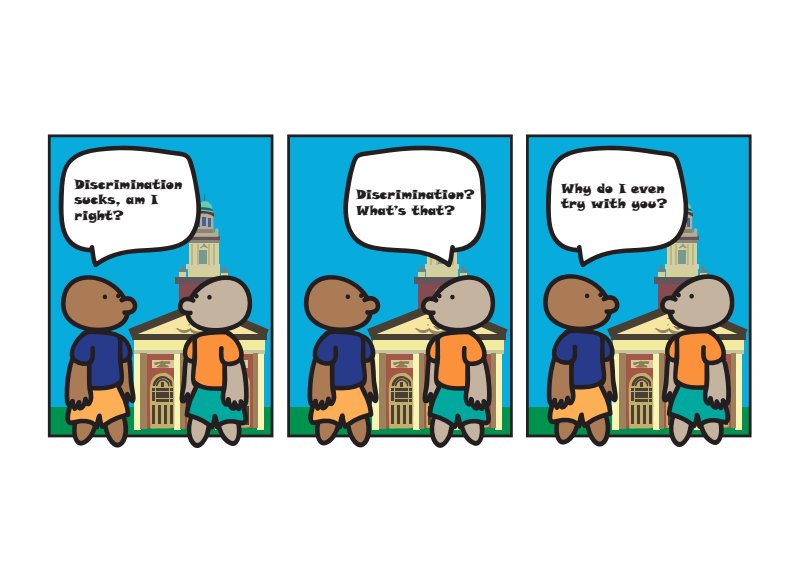 A cartoon demonstrating racism and discrimination at South. Graphic by Griffin Jones '18.

He was 12 years old when a group of girls came up to him. They kicked dirt over on him and ran away laughing, Rockim Williamson ’18  said.

“That really got under my skin. From that moment on I knew exactly what I was going to have to deal with growing up in this world,” Williamson said.

From experience, Williamson said he has felt treated as an outsider and does not always feel considered as another friend, but rather as a different type of person.

“Racism is not being able to see, in my own words, exactly what other people have, whether they be different religions or skin color,” Williamson said. “Just not accepting them for who they are.”

Caleb Marion ’17 said he has had a few experiences of his own where racism has been directed towards him. While walking down the street before while wearing a hoodie with the hood up or just baggy clothing, people approaching him will try to either avoid him or cross to the other side of the street, he said. On the other hand, on the occasions he is wearing a nice dress shirt and khakis, others will greet him in return to his wave.

“Living in Grosse Pointe as a mixed, bi-racial person, I’m half black half white, I would say every once in awhile I will see something or see someone look at me weird if I am not wearing a certain type of clothing,” said Marion. He also added, though, that he does not encounter racism very much on a daily basis.

Renee Liu ’19 said she lived in Canada for thirteen years before coming to the United States and is now a dual citizen. According to Liu, her grandparents, aunts and uncles still live in China. She is proud of her asian heritage and holds value in her family’s traditions.

“It’s just awesome to see how equally I’m treated and it makes me so happy to see how our society has improved so much in accepting those of color,” Lui said. “Obviously, we still have a ways to go until our society is totally accepting, but it has come a long way, even just from when my parents immigrated here 16 years ago to now.”

America has come a long way in their fight against racism, yet still has a long way to go. On this one Earth there are many worlds. Worlds divided by race, religion, social status and countless other differences that drive fissures through humanity. Williamson is tired of how people react to “different”.

“They don’t know exactly what different means. They see different, they see someone or something different and they run away from it,” Williamson said. “They do not accept change. Honestly it is just aggravating, it’s irritating and childish. It’s tiring for someone like me who has been going through this for a long time, it’s really tiring.”

Liu believes the most important part about understanding racism is that one should be aware of what one is saying, otherwise a joke may be received in way that is harmful to another.

“Everyone human is equal, no matter what color. To discriminate against someone based off their color is one of the lowest things someone can do, it just isn’t right or humane,” Liu said.

Responding to discrimination in our community and in the world can be a difficult task to take on. It begins with who you believe yourself to be as a person. There are people who do cross the street. Who believe another is not deserving of a hello or even smile. Who kick dirt on others believing that they are somehow justified to do this to another human being. Then run away. Run away laughing.

“First I would say think of who you are, yourself,” Williamson said. “There are many different ways an individual wants to address a certain situation but I feel in order to actually address a situation and know exactly what you should and should not do, you have to know exactly who you are.”