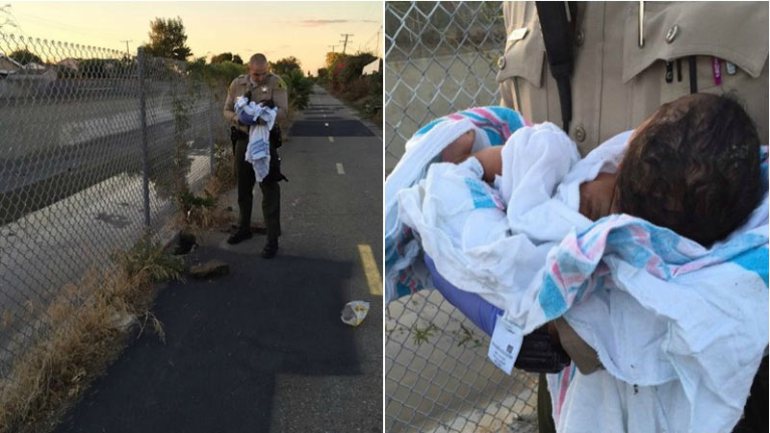 The Los Angeles Sheriff’s Department is asking for the public’s help with any information regarding the abandonment and endangerment of a newborn baby girl. (Source: Los Angeles County Sheriff)

In Los Angeles after hearing a very loud cry, police found a newborn baby buried alive. The baby was buried under pieces of asphalt and debris in a crevice and was wrapped in what the police thought was a hospital blanket. Police said the baby girl was born within the last 36-48 hours of being found. She is now in a stable condition and in the hospital. If the child’s parents are found, they will be charged with murder and child endangerment, especially since residents of Los Angeles always have the option to give their baby away with no questions asked.

In Colorado, two civilians and a police officer were killed in a shooting at a Planned Parenthood after a gunman opened fire. The police have suspect Robert Lewis Dear in custody but are unsure of his motive. None of the patients or staff of Planned Parenthood were shot. However, police officer Garrett Swasey was killed. Swasey was a six-year veteran of the University of Colorado Colorado Springs police force. The shootout lasted for six hours, wounding four civilians and five police officers along with the three deaths.

Veterans house demolished while he has surgery

Philip Williams’, a U.S. Navy Veteran, traveled from Long Island to Florida in the spring for knee surgery, and while he was gone, his house was demolished by officials in Hempstead, New York. Town officials said Williams’ two-story home was unfit for habitation and tore it down. Williams is now fighting a legal battle against the town for a reimbursement of his home and the personal belongings inside of it. Williams said he was never contacted before his home was demolished and said the house had sentimental value since he lived there since he was six months old.

In 1905 the captain of the USS Yankee, Francis Qualtrough, hosted a deadly boxing match on his ship. Now divers have found the ship, 110 years later. The fight was between Jordan Johnson and Raphael Cohen, and it was clear, according to reports at the time, that Qualtrough thought Johnson would be the better fighter. Johnson won the fight, left the Navy a year later and died in Chicago at the age of 46.

Overstock.com has $10 million in gold and silver hidden somewhere in Utah

Utah-based company overstock.com has a secret. Reports say the company has 30 days worth of food and a system to pay and feed employees in case of banking and payment system collapse. The company allegedly has $6 million worth of gold and $4.3 worth of silver in reserve, enough to pay their employees for at least a month.