Marching bands, football stands and the choices between them 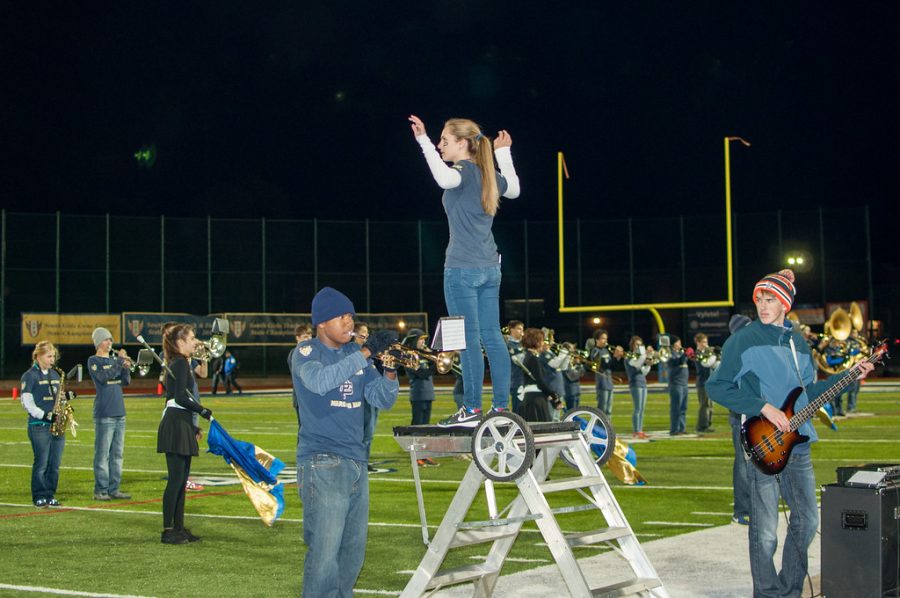 Playing high B-flats and football is proving to be a lot to handle for specific students at South who are involved with both marching band and the football teams.

Miles Dearing ‘19 has been playing football since he was eight years old.  He started this year’s season on the freshmen team, was then moved up to JV and is now on varsity.

Dearing also plays the trumpet in the South marching band.  He has been playing trumpet since he was 10 years old, Dearing said.

Dearing is a great example of someone who has decided both extracurricular activities are worth doing, band teacher Christopher Takis said.

“Miles is a very, very talented musician. I know how important music is to him, but I also know that football is a big part of his life,” Takis said. “One thing that he always tries to make it a point to do, is as soon as his game is done on Thursday nights, he’ll run over (to band) still wearing his pads and he’ll finish up rehearsal.”

Although Takis said Dearing is able to do both because he really wants to, Dearing said his schedule may force him to re-consider for next year.

Dearing said his after school schedule consists of going to football practice from 4-6 p.m., then marching band rehearsal from 6-8:30 p.m.

“It’s ridiculous,” Dearing said. “I get home at nine o’clock damn near every night, so it’s kind of hard to do two hours, three hours of homework so late.”

Takis said it is possible to do both if the student is willing to balance the large time commitments.

When Takis was in high school, he was a three year varsity soccer player, two year varsity football player and the section leader of the drum line in the marching band.

“I know I try to look back on, from personal experience, to say that both things meant a great deal to me, being able to play sports and being able to be in marching band,” Takis said. “I want to try and make sure my students have that same thing.”

Dearing said that although he loves performing in the half-time shows, the best thing about being in the marching band is  being in the stands during the game.

“Being able to watch the game, look at your peers play football, and then being able to root them on, which I love,” Dearing said.

Varsity football coach Tim Brandon said because the marching band is relatively new, he does not have this problem arise often.

“Due to the fact that both practice a lot and mostly at the same time, I would think it would be difficult to devote enough time to both that you could be anything more than average at each,” Brandon said via email.

Brandon said that if a student wanted to master one or the other, they would have to choose between them.

Because Dearing has such a busy schedule, he said he is planning on quitting the marching band next year.  Dearing was typically allowed to play in the stands, but conflicts began to arise when he started playing varsity during the Sterling Heights play-off game.

“I’ve been playing football for forever, and as much as I love marching band, football is my life and what I’ve worked for,” Dearing said. “I work hard and I know I haven’t reached my full potential yet, so why stop before I can be as good as I actually am?”

Dearing said his favorite thing about being on the football team is the comradery and the togetherness of the team.

“I don’t play for myself, it’s more me playing for the guy next to me, you know, making it so that we play as a team,” Dearing said.