The Tower Pulse • May 3, 2013 • https://thetowerpulse.net/14553/entertainment/south-choir-performs-admirably-in-42nd-street/ 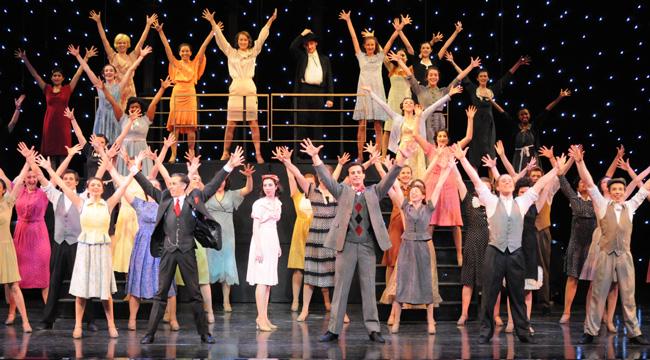 South choir has not missed a beat, since the new director, Christopher Pratt took over; the performance was high quality, from the acting to the singing to the dancing to the lighting, and heck, even the props. It was not always perfect, but choir should be proud of what they’ve accomplished with this superb production.

Perhaps the highlight of the night was the tap dancing. It was frequent and well executed, especially in the final song, “42nd Street.”  Such an energetic and impressive display ended the show perfectly.

The best number was “Shuffle Off to Buffalo.” The entire ensemble sung with such great gumption, I may have even started tapping my toes. To see a high school choir handle a song so well was fantastic.

The next best thing would have to be the humor, not only is “42nd Street” a rather funny play, but being funny requires timing, which the students largely demonstrated, especially Emma Aboukasm ‘14 as starlet Dorothy Brock, who delivered laughs and smiles like no other.

The song “Shadow Waltz” was hilarious, as Aboukasm’s character Dorothy is a terrible dancer thrown into a dance number. Expectantly  the results are less than spectacular. She struggles to even walk, let alone dance, until she finally collapses from sheer exhaustion.

Now, let me preface any criticism by saying that yes, a musical is a difficult undertaking and that these are high school kids who have to deal with seven or so hours of school each day.

However, during the first act particularly, the delivery of lines, not jokes, were either late a few counts or stammered. I believe it was because of nerves, because the second act was almost perfect in this regard.

It really was a tale of two acts; the first act was fine but was missing a certain confidence previous choir productions have had, such as “Phantom of the Opera,” and “Pippin.” But the second act was vastly superb, simply much better done in all facets of the production, and the ensemble should be commended for that.

Another strong point was the acting. In particular Jack Kay ’14 was great in a largely non-singing role as director Julian Marsh. He played the role with intensity and with a professionalism rarely seen in high school productions.

The final solo by Kay, was perhaps my favorite, because after two of hours of one-liners and fast-paced dancing, it is an almost melancholic look at Broadway, and was a great way to end the show.

Ali Yenchick ‘13 as Maggie Jones stole several scenes, with a thick New York accent and some funny quips about “Showbiz” and “suga dadies.”  It was great to see a high school student take over a role and own it.

She and Patrick Flanagan ’13 play off each other well as the writers of the fake show “Pretty Lady,” but also show ability during the previously mentioned “Shuffle Off to Buffalo.”

I’d also like to call attention to the crew behind the curtain, during the dress rehearsal I watched, there were some struggles that were really dragging the show down, such as steps that struggled to get into position for a song. However, by opening night it seemed like they worked out the kinks and were pretty impressive, with fake money and confetti being dropped from the ceiling onto the audience during “We’re in the Money.”

Finally, as a choir production, I thought the singing was pretty good. The first act seemed a little toned down, but the second act was top-notch.

All in all, I thought the choir did an excellent job. I’d give the first act a B+ and the second act an A+ so, I’ll average it out to an “A.”